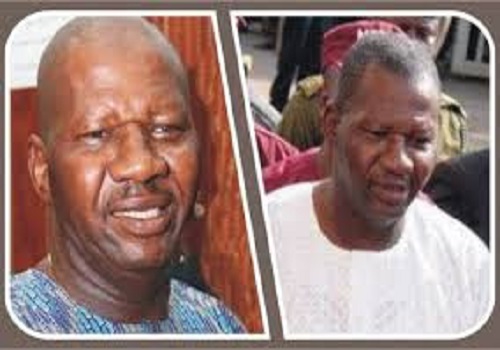 Many Nollywood stars on Thursday, stormed the residence of veteran comic actor Babatunde Omidina aka Baba Suwe.
Baba Suwe was laid to rest on Thursday in his Ikorodu residence area of Lagos.

He died on Monday after a long battle with an undisclosed illness.

The President of the Theater Arts and Motions Pictures Producers Association of Nigeria (TAMPAN), Bolaji Amusan; Adebayo Salami, aka “Oga Bello”, Olaniyi Afonja aka Sanyeri, Adekola Tijani aka “Kamilu Kompo” were in attendance.

Other Nollywood stars, including Femi Adebayo, Alhaja Fausat Abeni Balogun aka Madam Saje, Ibironke Ojo-Anthony aka Ronke Oshodi Oke and others were also at the event.

Islamic cleric, Sheikh Ahamad Olanrewaju Alfulanny, who led other clerics to perform the burial rites, urged everyone who sympathised and commiserated with Baba Suwe’s family to live a holy and calm life.

VIDEO: How I Used Hotel Receipt To Trace Whereabout Of My Husband – Widow Of Timothy Oludare Adegoke