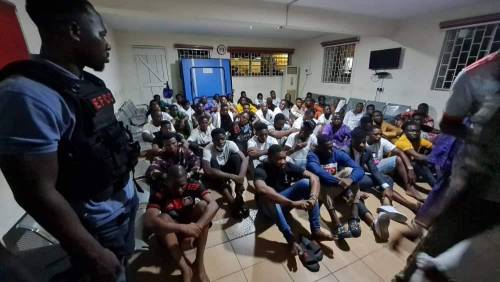 No fewer than 60 suspected internet fraudsters have been arrested by Economic and Financial Crimes Commission (EFCC) in Ogun State.

According to Daily Post, the suspects were nabbed in a ceremony at the Conference Hotel in Abeokuta, the state capital, owned by Gbenga Daniel, a former Ogun Governor and an All Progressives Congress (APC) chieftain.

This was confirmed by the EFCC Head of Media, Wilson Uwujaren, in a statement on Monday. He noted that the event, tagged “Peer Youths Awards”, was organised “to reward high-level internet fraudsters.”

“The suspects will soon be charged to court,” he added.

Items recovered from the suspects at the point of arrest included; exotic cars, electronic devices, laptop computers and mobile phones.

The EFCC carried out the sting operation between Saturday night and early hours of Sunday morning.

Hilton Hotel Had Been Monitoring My Husband Before He Was Killed – Wife Of OAU MBA Student, Adegoke

‘Yahoo Boy’ On The Run Over Suspected Ritual Killing Of Girlfriend