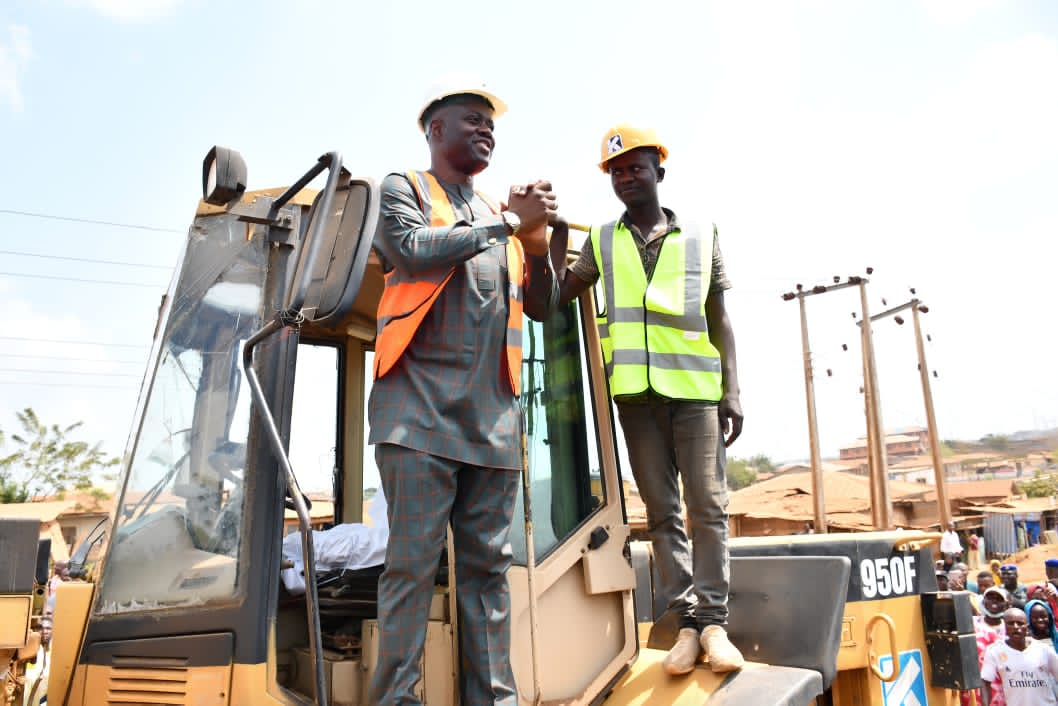 The people of Ona Ara Local Government, in Ibadan axis of Oyo State have lavished encomiums on Governor Seyi Makinde for his readiness to construct Olorunsogo- Ona Ara road.

The Commissioner for Public Works, Professor Daud Sangodoyin disclosed this,during the meeting with the stakeholders and other prominent people in the local government.

Sangodoyin said that Oyo State Government had got set to ensure that Olorunsogo-Ona Ara road to Ariyo axis of the local government becomes motorable and turns to dualized road, while Ariyo to Boundary would be a standard lane road.

Commissioner in his meeting with the stakeholders before the Flagg off disclosed that the road would be dualized to ease the passage of the road users.

Sangodoyin who was also in company of the Special Adviser, Mr Adeleye maintained that the construction of the road would last for complete one year and its commissioning would be done shortly after its completion.

He stated that quality and standard road would be put in place, and however released some hot lines that could be contacted, provided the engineers come up with substandard road.

Naija Today News in its interaction with Lukman Adeshina, an indigene of the local government showered encomiums on Governor Seyi Makinde for taking a giant stride on road, which has been abandoned for decades.

Adeshina maintained that the news of the road’s construction came at a time while all the inhabitants of the community are making frantic efforts on how the road would become motorable.

He said that, it was a thing of joy that the major road being plied by over one million inhabitants of the community would wear a new outlook of dualization via standard construction.

He however said that the people of the community would begin to count date of the road’s commissioning with effect from the date its flag off was done, appealing to government to keep to its promise and ensures the road becomes motorable at the stipulated time.

Another respondent, Samuel Adekunle commended Senator Teslim Folarin and Hon.Akin Alabi for their efforts towards the smooth construction of Aba Abounde and NEPA roads in the community, adding that the giant one is the road which the governor has shown readiness to construct.

Adekunle condemned the tactics and manner of some politicians who had in the past made promises to make the road motorable but all to no avail.

He stressed that the poor state of the road has relegated the local government to underdeveloped one, with failure of economy to thrive.

Adekunle lamented that the road had turned to worse before the arrival of Chief Dotun Sanusi, CEO Ilaji Hotels & Sports Resort, whose efforts began to count immediately his gigantic business edifice is sited in the community.

He however commended Dotun Sanusi for his efforts to maintain and manage the road till moment government flagged off its construction from Olorunsogo to Boundary axis of the local government.

He reiterated that the construction of the road will prevent traffic gridlock, enhance free flow of the road users and largely improve economy of the local government.