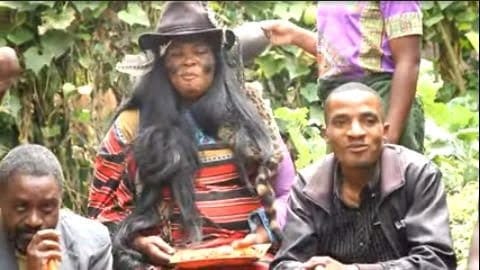 Meet Woman ‘Spiritualist’ Who Married Seven Husbands, Satisfies Them Equally And None Of Them Dares To Cheat On Her {VIDEO}

This is the story of a yet to be identified woman ‘Spiritualist’ whose marriage to 7 husbands in Africa went viral and it’s still trending.

According to reports, she peacefully lives with all of them and for every husband, she has built a house and has six children so far with each of them while she is yet to conceive for the 7th husband.

She loves all 7 of her husbands so much and her sleep schedule is usual. They can’t cheat on her because of her spiritual powers. According to her, she’s the one who decides where and who to sleep with at any time. She satisfies all of them and none of them can dare cheat on her.

Her neighbours are so afraid of her and don’t talk to her or have anything to do with her because of her power. This woman is regarded as been an exceptional woman who do things differently from other people, she has lived and behaved differently since she was born, she’s never cut her hair. Similar to the biblical Samson, her hair has strength.

She has the power allegedly to revive dead people. She is an indigenous doctor and thinks that ancestral spirits can restore life to good people according to her believe.

She married seven husbands and she says she could add more if the elders of her town agree with her. She decided to be polyandrous to prevent the elders from punishing her. The elders told her that she should never conceive more than one child with a single man.

Although this condition was a difficult one for her to accep but had to agree because she had no choice. The elders chose the husbands for her, and through dreams and vision they received the choice. She would call the man and propose after receiving the message.

Polyandry is a form of polygamy in which a woman takes two or more husbands at the same time. Polyandry is contrasted with polygyny, involving one male and two or more females.

If a marriage involves a plural number of “husbands and wives” participants of each gender, then it can be called polygamy, group or conjoint marriage.

In its broadest use, polyandry refers to sexual relations with multiple males within or without marriage.

(EXCLUSIVE): New List Of Secretaries, Supervisory Councillors And Special Assistants In Oyo Has Been Released