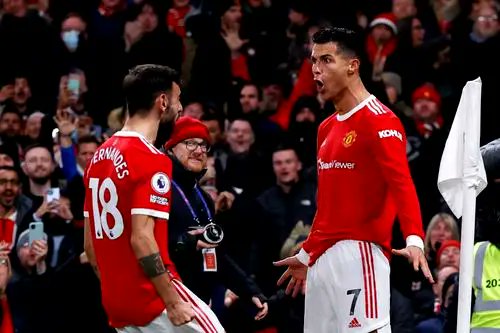 Manchester United continued their fine form under Michael Carrick, beating Arsenal 3-2 to go sixth and end a six-game winless run against the Londoners.

Cristiano Ronaldo scored his 800th and 801st career goal while they were at it. It was also the first time he scored at home since his goals on his debut against Newcastle in September.

Arsenal went ahead after Smith Rowe put the ball into an unguarded net that resulted from David De Gea going down injured following a collision with Fred. Bruno Fernandes who has had a surprising goal drought drew United level on the stroke of half time.

An unmarked Ronaldo scored his first goal from a Marcus Rashford assist and grabbed his second from the spot after Fred was fouled by Martin Odegaard who got Arsenal’s second.

Ronaldo was subbed off in the 89th minute and replaced by Anthony Martial while Bukayo Saka who was a doubt got to play the final twenty-five minutes of the fixture.

The defeat means Arsenal missed the opportunity to go 4th for the first time this season, their second loss in three games which leaves them in the 5th position and takes Man United up to 7th.