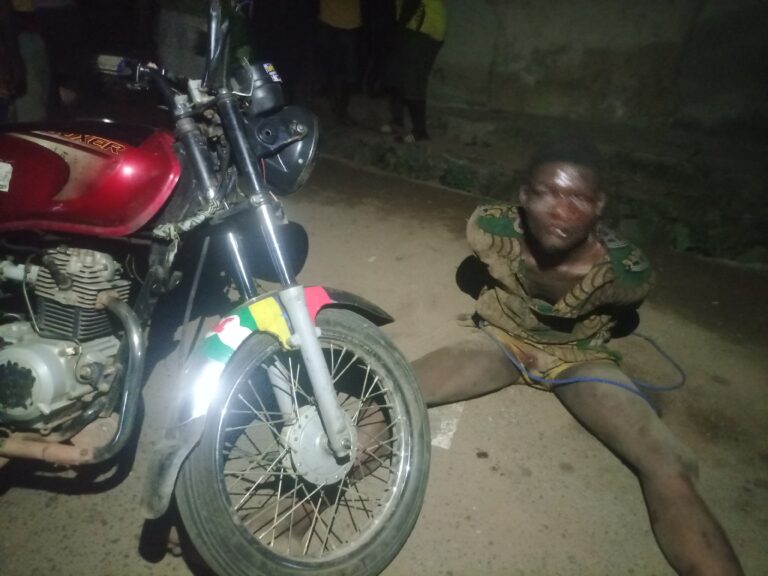 The sad incident happened in the early hour of Friday, December 3, while the angry youths at winners way, Oyebamiji street, Bashorun Ibadan, set the yet to be identified person ablaze over the theft of phone.

Naijatodaynews.com.ng in its investigation learnt that the person burnt was alleged of stealing motorcycle, while verifiable information showed that it was an android phone that he and other suspected thieves snatched from the owner.

The Phone’s owner who declined to disclose his identity while speaking with the online news medium, said that the person burnt and his fled colleagues asked of the way leading to Iwo road and he described how the place could be located.

The guy added that, to his surprise, they turned and asked him to handover his phone to them, he declined and he was forced to get the phone from him.

He said, immediately they snatched the phone from him, they instantly took to their heels but one of them met his waterloo having failed to escape with others.

He said while the irate youths caught him, he was mercilessly beaten stupor before they eventually set him ablaze.

In an interaction with the Divisional Police Officer, DPO, Agodi Divisional Headquarters, Iwo Road, Ibadan Northeast Local Government Area of Oyo State, CSP Oyekan Afeez Alabi, he disclosed that he and his other men of NPF in the axis tried all best of theirs to stop them from setting him ablaze but all to no avail.

He stressed that immediately they were alerted of the sad development, they all swung into action, while they got to the scene, they found out that they have placed tyre around his neck, wet him with petrol and set him ablaze without listening to them.

DPO however cautioned people to avoid taking law unto their hands, stressing that jungle justice is an offence which men of the law and country at large can’t toy with.