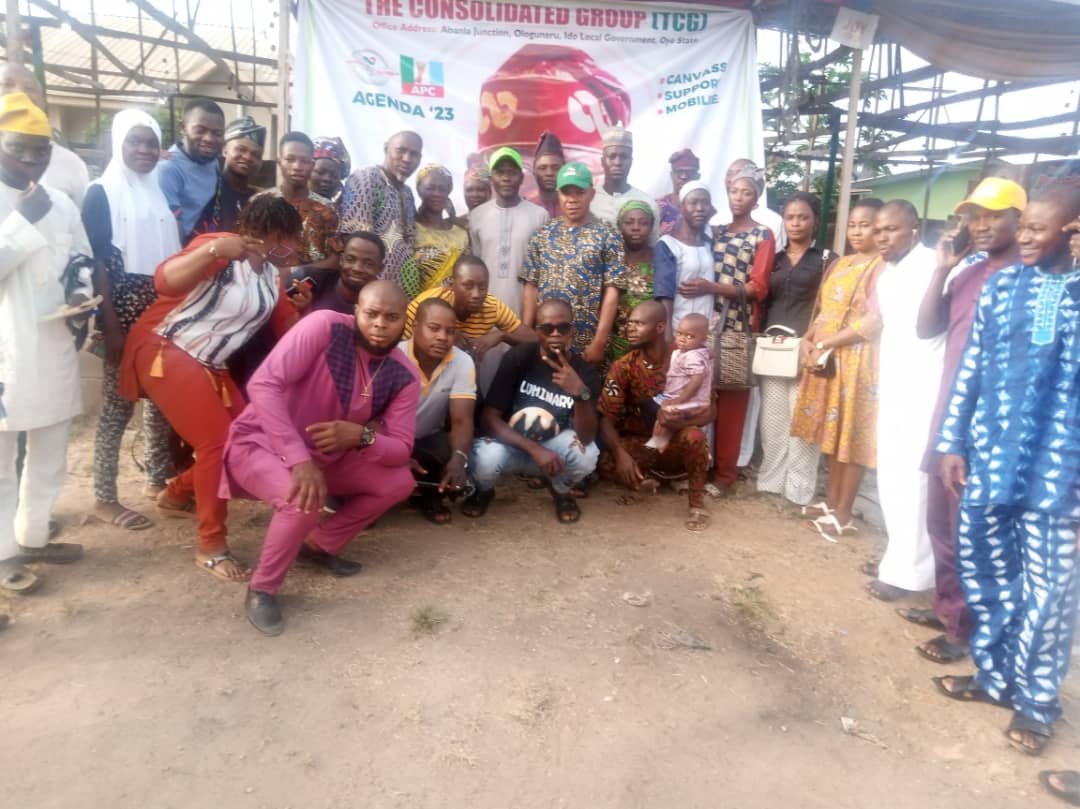 The consolidated group is an APC political group that was established by Com. Seun Lanre Oketooto who served as the Secretary General of the vibrant Great Ife Student’s Union at Obafemi Awolowo University and has served in some political capacities both in Lagos State and Oyo state. The aims of this group include mobilization of electorates for active participation in politics, organisation of programs, symposia, empowerment schemes, scholarships, projection of APC’s agenda, liaison with non governmental organizations inorder to promote active Community service.

It was a great moment as about 100 members of the group converged at Abanla Community Hall solely because of the adoption of SOUTH WEST AGENDA SWAGA in Oyo state which her aim is to convince and present ASIWAJU AHMED BOLA TINUBU in order to contest for the office of the president of the federal republic of Nigeria under the umbrella of APC.

Based on the one of the aims of the pan political group which is projecting APC agenda and because of a FUNCTIONAL, SACRIFICIAL, RELIABLE, SELFLESS,IDEOLOGICAL, LEADER OF LEADERS, MAKER OF LEADERS, ARCHITECT OF APC, ORCHESTRATOR OF 30 YEARS MASTER PLAN OF MODERN LAGOS STATE, INITIATOR OF THE CREATION OF LOCAL GOVERNMENTS AND A MASTER POLITICAL STRATEGIST/CALCULATOR in person of ASIWAJU AHMED BOLA TINUBU, it was gathered that the leader of this noble political group had expended a lot in terms of energy, finance and time to convince the members of the group to adopt ASIWAJU AHMED BOLA TINUBU as a South West Agenda SWAGA in Oyo State before eventually hosting an historic meeting to adopt and launch SWAGA officially.

After a vivid assessment of the experience and achievement of ASIWAJU AHMED BOLA TINUBU in the political landscape of Lagos state and Nigeria at large coupled with the rememrance that it was his master plan which successive administrations in Lagos State build upon has made Lagos State stand out in terms of development and achieving its mega city status, which is a work in progress, a true Democrat and a progressive in all ramifications, TCG is proud to declare full support for our very own ASIWAJU AHMED BOLA TINUBU, an highly esteemed leader per excellence.

As a group, we will continue to mobilize a meaningful collaboration and participation of Nigerians to actualize his goals to become the president of this great country come 2023.