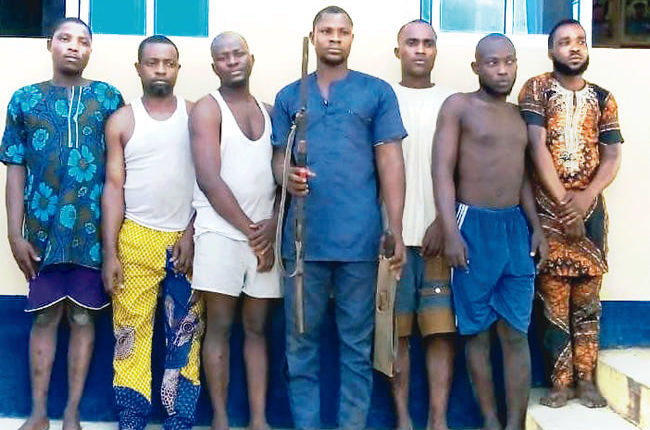 From Hunting To Ritual Killing: How I Shot, Dismembered Victim For N51,000 To Get Body Parts —Suspect

Seven suspected members of a syndicate which specialised in killing innocent victims to get their body parts for ritual have opened up on their involvement in the criminal act.

The suspects were arrested by detectives in Ogun State Police Command after the murder of one Sunday Okosun and his dismemberment, with the intention of selling and buying the body parts for money ritual purposes.

The names of the suspects were given as Oladipupo Lekan, Aremu Sulaimon, Madru Ifayemi, Shittu Saheed, Sulaimon Samad, Akanji Moruf and Adekunle Tajudeen.

In the quest to make money from the sale of the body parts to those in need of them, Lekan, a hunter, reportedly went to the bush on a bright afternoon, and made darkness and death to envelop the victim, Okosun, whom he sighted, shot dead at close range and dismembered. After putting in a sack the body parts, including the head, heart, two hands cut from the wrist and a piece of flesh from his thigh, he took them to his contact, Sulaimon, and got paid with a sum of N51,000.

Crimefeature learnt that the stump of late Sunday’s body was discovered by his brother, Abraham Okosun. Shocked and saddened by the gory image he saw, Abraham lodged the report with the Divisional Police Officer of Bode Olude Police Station, DSP Durojaye Rotimi, who visited the scene with his crack detectives and embarked on intelligence-based investigation to unravel those behind the dastardly act.

First to be traced and arrested was Lekan, the hunter, followed by six other suspects involved in the sale and purchase of the body parts.

During their confessions, the suspects disclosed the code names they were using among themselves for each of the human parts sold and bought.

They said that they normally referred to human head as ball, the heart as transformer, and hands as fans. Recovered from them were the gun and cutlass used for the killing and dismemberment.

Crimefeature had an interview with the suspects. Below are the excerpts:

“I’m 38 years old, living at Bode Olude area of Abeokuta. I’m a motorcycle rider married and blessed with three children. It is true that I killed a human being. I was pushed into committing the act.

“It was Sulaimon who called me that his friends who are Muslim clerics (Afaa) needed body parts. We both belong to hunters’ group. He said they needed the head, hands, heart and some pieces of flesh. It took some weeks before I could do the job.

“I went into the bush where we used to hunt for animals in the afternoon. It was close to Federal University of Agriculture, Abeokuta (FUNAAB). As I was going, I sighted a man ahead of me standing and watching his bean plants. I aimed my barrel gun at him and shot him at close range.

“Immediately, I cut off his head, heart,  hands and flesh from his thigh. I left the stump there, called Sulaimon and handed the parts to him.

“It was a couple of weeks after that I saw the call of DPO Bode Olude, inviting me to the station. I was detained and when interrogated, I confessed to killing the victim. The police also got those who bought the body parts, except one who escaped.

“I killed the victim because of money that I would get from the assignment. I have never done such a thing before.”

“I’m a native doctor. I started three years ago, but it didn’t stop me from praying in the mosque. I’m part of the hunters’ group. My job is to set the dogs up for the targeted prey.

I asked each of them the parts they needed and Moruf said he would like to have the heart. Tajudeen said he needed the head while Ifayemi needed part of the flesh. That was how Olalekan went to kill the victim, handed the body parts to me, which I, in turn, gave to those who demanded for them and collected money for the job.

I was not given a kobo from the money paid to Lekan.

“I know that I made that mistake by not informing the police when my friend asked me about getting a human head. But I was never part of the plan of killing for ritual.”

“I’m an Afaa. I’ve never done such a thing before. It’s true I referred to human head as ball. I also heard it somewhere and started using the code. I bought the hands for N15,000 to make money ritual in order to survive.”

I’m a native doctor. Sulaimon is my first cousin. After I initially told him I needed human heart, it was five days after that he first called me and later brought the heart to my house when I didn’t respond to his calls. I told him I didn’t know the ritual to perform with it, but he persuaded me to buy it and I paid N11,000. I wanted to use the heart for money ritual.

“I’m a native doctor. I didn’t ask others to kill a human being. It was Sulaimon who called and told me that he went for hunting and they found a dead body. I also wanted to make money ritual.”

“I’m a native doctor also. I caused the calamity for myself as I only helped my friend, Saheed, to purchase the human head. And he has run away. Saheed had initially told me that he needed a human head.

“Moruf came to me and told me he was going to his cousin, Sulaimon. It was when we got there that he wanted to collect body part. I asked for the cost of the head and was told it was N20,000. I called Saheed and he brought the money. We gave him the head.”

The state Commissioner of Police, Lanre Bankole, who condemned the act and described it as height of man inhumanity to man, ordered the suspects to be transferred to homicide section of the State Criminal Investigation and Intelligence Department, Eleweran, Abeokuta, for discreet investigation, after which they would be arraigned in court.