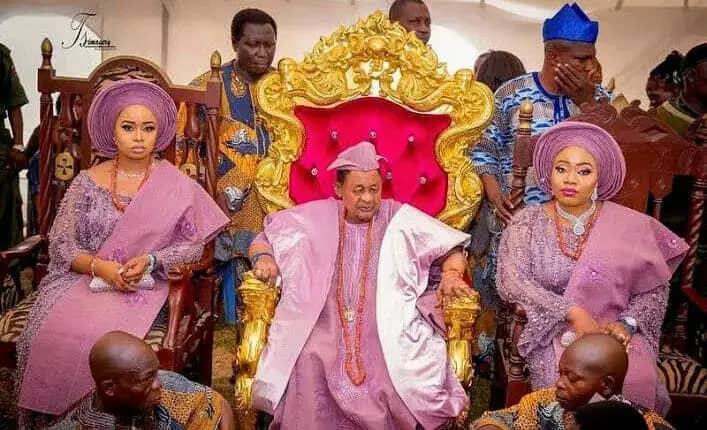 The Alaafin of Oyo, Oba Lamidi Olayiwola Adeyemi III has reportedly requested a paternity test from one of his queens over claims of infidelity.

According to popular Nigerian blogger Gist Lover,one of the queens of the Alaafin, Queen Damilola was caught in bed with another man in the UK.

Gist lover disclosed that Queen Dami after tendering a public apology on her page was also denied entrance when she went to the palace.

”Trouble in the palace as ALAFFIN requests for DNA from one of his Queens shortly after the Queen was caught with another man in the UK.

ALAFFIN OF OYO PALACE DON SCATTER OOO. QUEEN DAMI WHO TENDERED THE PUBLIC APOLOGY WAS DENIED ENTRANCE INTO THE PALACE and ALAAFIN NO COLLECT AM BACK, Na why mama never Dey post slay Queen picture for palace 😂😂😂 she’s been squatting with a friend now.

“THEY SENT MESSAGE TO THE KING ABOUT OMO WAYWARDNESS FOR UK AND NOW IKU BABA YEYE WANTS TO DO DNA FOR OMO KIDS NOW, THE THIRD QUEEN( IYA META) WHO WENT WITH OMO TO THE UK WAS DEPORTED BECAUSE ACCORDING TO QUEEN OMO NA IYA META GO DEY GIVE KING THE GIST SO OMO PLANNED WITH HER SAID BOYFRIEND AND THE THIRD OLORI WAS DEPORTED.”