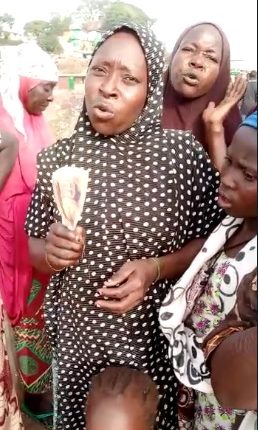 A Nigerian man based in the United Kingdom (UK) on Sunday sent some money to a group of beggars in Ibadan whose agonising stories were published in the Saturday Tribune of  November 13, 2021.

The women beggars had told Saturday Tribune heart-rending stories of how terrorists killed their family members including their husbands necessitating their relocation to Ibadan to beg for alms.

One of them, Rukayat Bello, said Boko Haram killed her husband and all her seven sons. “I don’t have any child anymore. Boko Haram killed all my seven children and my husband. They rustled our cattle and abducted my daughters-in-law. I have no one left. It is just me and God…”

After reading the report, Mr Gbenga Okunlola who is based in the UK got in touch with the reporter who wrote the story, and through her (the reporter) the money was delivered to the beggars at their alms collection point in Ojo, Ibadan.

After collecting the money from the reporter on Sunday, the beggars, in this video, speaking in Hausa language expressed joy and appreciation to the donor.