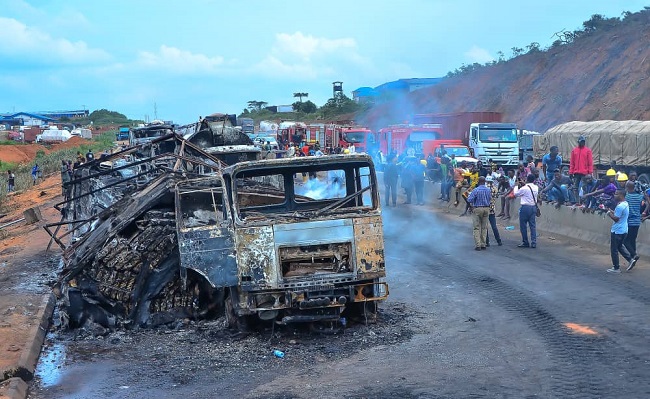 13 persons lost their lives on Christmas day in two separate motor accidents on the Lagos- Ibadan and Sagamu-Benin expressways.

Umar disclosed that six persons died while 12 were injured in an accident that involved a Toyota Hiace bus and Iveco trailer opposite ELANLAN construction zone on the Lagos-Ibadan expressway.

The FRSC boss said the accident happened at about 3:20 am while noting that the accident was suspected to have been caused by road construction, excessive speed and loss of control on the part of the trailer driver.

He said that the two vehicles involved included a Toyota Hiace bus marked MK A567 XZ and an Iveco trailer with registration number XF 854 KTN.

The FRSC boss noted that the injured victims were taken to different hospitals, saying some were taken to Lagos State Accident and Emergency Unit, Ojota, some to Divine touch hospital, Ibafo and Olabisi Onabanjo University Teaching Hospital, Sagamu.

Umar stated that the deceased were deposited at Idera Mortuary Sagamu.

Similarly, seven persons lost their lives on the same day in an accident involving a Mercedes Benz luxury bus on Ososa bridge along the Sagamu-Benin expressway.

Umar said seven other persons were injured in the accident that occurred at about 12:20 am, as a result of excessive speeding, wrongful overtaking and loss of control.

He added that the injured victims were rendered first aid treatment while the deceased were deposited at State Hospital Mortuary, Ijebu Ode.

The sector commander cautioned motorists on dangerous driving, especially during this period of high vehicular movement and night travel when visibility is poor.

Family Of Corper Who Proposed To A Female Soldier Speaks, Says Their Friendship Started 3 Years Ago