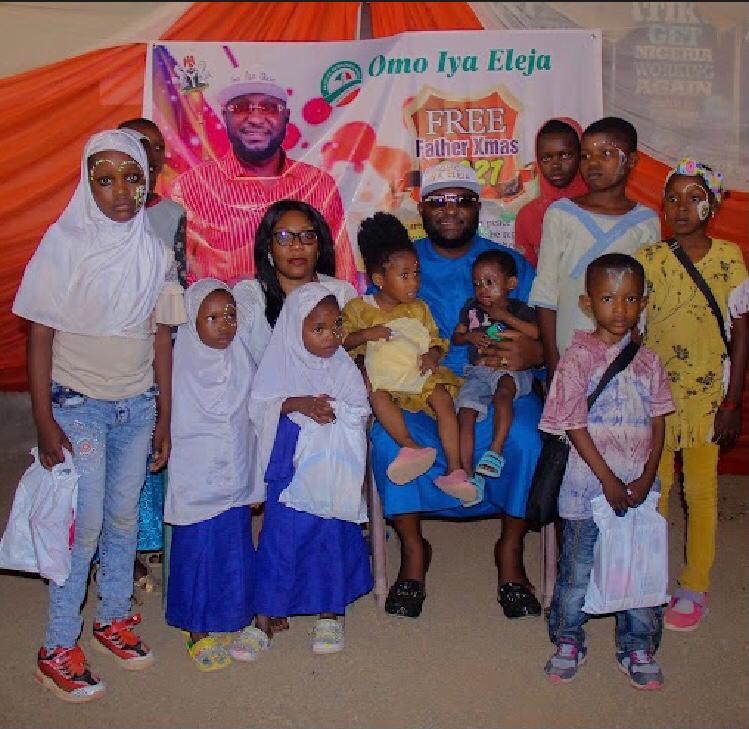 The Ibadan Northeast, Southeast aspiring federal lawmaker said at the party that he wanted the children to experience the joy of Christmas as he did while growing up.

Omo Iya Eleja said: “I have a nostalgic feeling of when I was growing up; I always enjoy Christmas because we had so many events and it was always fun.

“We were always looking forward to it; from Christmas clothes to shoes, good food, the merriment, also taking to Santa Claus and his gifts was part of the fun back then.

“I remember growing up in that manner; that’s why I thought ‘What a better way to celebrate my Christmas is having it with the children of my federal Constituency.

We held this kind party for the children last year, we started the party 22nd and will end today 23rd at Richard Akinjide House, Ile-Aperin, Ibadan, by God grace another one will hold next year.

A mother of two, Mr. Taiwo Jibike, said she was invited by a friend because she was bored at home. “The party is wow and everything is looking good; what Omo Iya-Eleja has done for the children is really wonderful,” she said.

Also, Mrs. Kafilat Olaoti, a mother who came with her three children, also expressed her joy, saying: “My children are happy; so am I too.”

In his remarks, Omo Iya-Eleja urged the children to continue to show love to their parents and families for the opportunity given to them to have a good life and prospective future. Implored them to continue to listen to the counsel of their parents and guardians, saying that it is by doing so that they could achieve their set goals and maximise their potential.

“They are the ones that have been able to put you all in good condition and I urge you to continue to show love to your parents and make sure that the things they teach you, you take them seriously so that you can become successful lawyers, doctors, accountants, pilots and all the good things you wish to become in life.

“My prayer for you all is that you would all grow to be bigger and more prosperous than all of us. I want to also thank the parents for keeping this children, God would continue to reward you,” he said.

Moreso, Omo Iya Eleja facilitated with OYO state governor, Seyi Makinde on the occasion of his 54th birthday that was held yesterday, 25th of December, described the governor as a complete gentleman, a peacemaker and a bridge-builder.

Omo Iya Eleja noted that governor Makinde since assumption of office, has demonstrated passion through meaningful contributions to develop not only Oyo State but the Southwest , and the entire country which is considered to be legendary.

“ He pray to God to grant governor Makinde long life, good health and increase his wisdom to continue to provide the needed leadership.