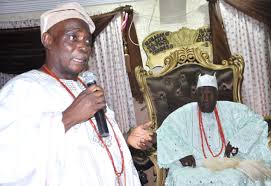 The Osi Olubadan of Ibadanland and former Governor of Oyo State, Chief Rashidi Ladoja, has arrived at the Olubadan’s Palace in Ibadan.

77-year-old Ladoja, is the third in command in the Olubadan-in-Council.

He arrived on Sunday afternoon. Many other dignitaries are also expected to arrive at the Palace.

The final burial rites for the late Monarch will hold today by 4pm.

Many clerics have also arrived at the palace to observe the final burial rites.