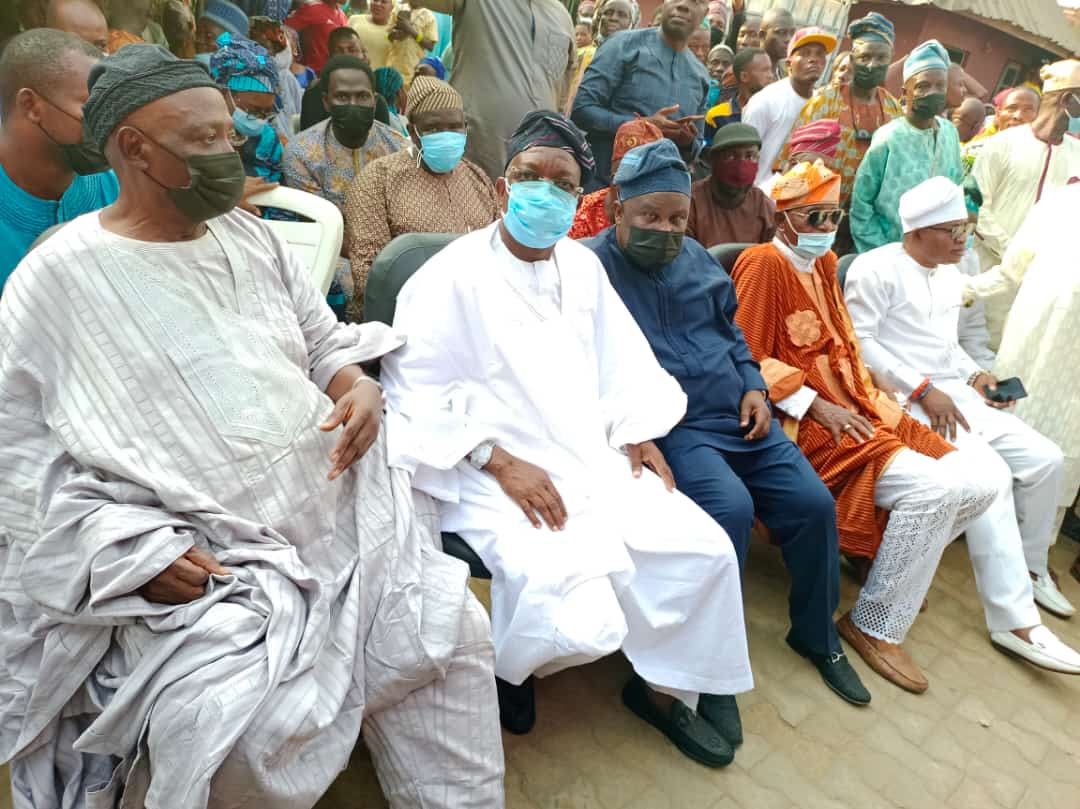 THE remains of the late Olubadan of Ibadan, Oba Saliu Adetunji, Ogunguniso 1, who died on Sunday, January, 2, at the age of 93, were interred in his Popoyemoja palace, Ibadan, on the same day, according to Islamic rites.

The corpse was taken for interment after a lying-state at the ancient Mapo Hall, Ibadan for the late traditional ruler.

Prominent personalities who attended the burial at the palace of the late monarch included Governor ‘Seyi Makinde, who was represented by his deputy, Rauf Olaniyan; former of the state and the Osi Olubadan, Chief Rasheed Ladoja, another former governor of the state, Otunba Adebayo Alao Akala, former and present President of Central Council of Ibadan Indigenes, Chief Bayo Oyero and Prince Yemisi Adeaga respectively.

The palace of the late monarch at Popoyemoja was locked down, as sympathisers trooped in to catch the glimpse of the corps of late Oba Adetunji, who was interred at exactly 4:55pm.

Eulogising the late Oba Adetunji, the deputy governor, Rauf Olaniyan, who represented Gov Makinde, said before he (Oba Adetunji) became the Olubadan, people had been tasting from his word of experience, from his philanthropic nature for more than 60 years.

He said: “Late Kabiesi had made a lot of people, “Oruko n ro Kabiyesi.”

“We are going to miss him but we have no choice,we pray may God Almighty Allah provide a successor that will do more than him.”

“As time goes on, we are going to unfold. Everybody knows that the deceased Olubadan was a blessing to Ibadanland and Oyo State.”

“So you can only talk about him from the phase you see, for over 93 years people had been drawing from his wealth knowledge and never runs dry till he breathed the last.”

“Nobody gets here and never eats or get blessed. We thank God for the life of Kabiyesi,” Olaniyan added.

Olubadan nurtured me from adolescent to adulthood – Wasiu Ayinde
Fuji music icon, Alhaji Wasiu Ayinde Marshall, popularly known as K1, said the death of Oba Adetunji meant so much to him.

“I will miss everything about him. There is no way you will not miss someone who made you for the past 50 years, so I will miss him alot.”

The most important legacy he left is that, Kabiesi lived a fulfilled life. He never compromised, he was a disciplined man to the core. A man that was honest in all his dealings in all his life.”

“He was so honest and plain, he will never tell you what he will not do. He dealt with me for many years, he tells me exactly what he was going do and he never tells me what he would not do.”

Olubadan’s death saddens me – Oyero
In his tribute, the former President of the Central Council of Ibadan Indegines, CCII, Chief Bayo Oyero, described the death of Oba Adetunji a very sad one to him in particular and Ibadan in general.

“Of course, any death is saddening, but the departure of Baba Olubadan of Ibadan was really something that is really shocking.”

Despite the fact that Baba was old at 93, he wasn’t a young man but nevertheless, Ibadan will feel his departure.”

“His reign had been very peaceful, as much as possible. Baba was a man of peace and I was particularly close to Baba ever before he became the Olubadan of Ibadanland. So, it was a personal loss to me, apart from loss as omo Ibadan,” he Oyero said.

Governor ‘Seyi Makinde, earlier in his condolence message issued by his Chief Press Secretary, Mr. Taiwo Adisa, said the late monarch gave his all to see that Ibadanland is developed and took its pride of place as one of the major cities in Africa.

His words: “The news of the death of our father, His Imperial Majesty, Oba Saliu Adetunji, Aje Ogungunniso I, came as a shock.”

“Kabiyesi’s exit at this time is painful, to say the least. His wealth of experience, his immense wisdom and his commitment to seeing a greater Ibadan and a better Oyo State are unrivalled.”

“Ibadan, Oyo State, Nigeria and humanity at large will miss Kabiyesi, who was ever ready to give his all to see a better society.”

“I commiserate with his immediate family, the Olubadan-in-Council, the Central Council of Ibadan Indigenes (CCII) and all Ibadan indigenes at home and abroad on the demise of our father.”

“I equally extend my condolences to the Oyo State Traditional Council and pray to God to keep all our Obas safe and give them more years to direct the affairs of our people, especially as Olubadan’s death is coming on the heels of the demise of the Soun of Ogbomosoland and Asigangan of Igangan. May God grant them all eternal rest,” Makinde prayed.

While commiserating the family of the deceased monarch and the Ibadan people, the Speaker of the state’s House of Assembly, Mr. Adebo Ogundoyin expressed shock over the death of the traditional ruler, describing the death as shocking and unbelievable.

He said in his statement: ” Just within the spate of one month, Oyo State lost three highly revered Obas to the cold hands of death. This is really shocking and unbelievable.”

“First it was the Soun of Ogbomosoland, Oba Jimoh Oyewumi, Ajagungbade the third, second was the Asigangan of Igangan, Oba Lasisi Olawuyi Adeoyo and now the Olubadan of Ibadanland.”

“I’ll like to commiserate with the good people of Ibadanland, and Oyo State in general on this sad incident in the new year. We have lost another highly successful businessman and a good father to us all.”

“Our government has lost another very good friend and adviser. My heartfelt sympathies to the Oyo State traditional Council of Obas and particularly to the Olubadan in Council for this great loss.”

Ogundoyin stated that late Oba Adetunji was a principled and morally upright traditional ruler whose fatherly advice will be missed.

The Olubadan joined his ancestors at the early hours of Sunday at the University College Hospital, UCH Ibadan.

Late Oba Adetunji, ascended the throne as the 41st Olubadan of Ibadanland on Friday, March 4, 2016.

Meanwhile, the Otun Olubadan, High Chief Lakan Balogun and other members of the Olubadan- in -Council were absent at the burial, except High Chief Rasheed Ladoja, who accompanied the deputy governor, who represented Governor Makinde.