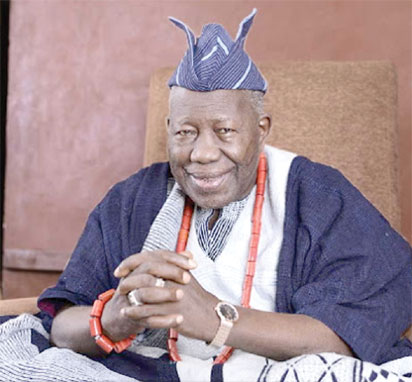 A member of the Oyo State House of Assembly representing Ibadan North Constituency ll, Hon. Adebayo Babajide Gabriel has describe the death of death of the Olubadan of Ibadanland, His Imperial Majesty, Oba Saliu Adetunji as a rude shock to all sons and daughters of Ibadan land.

In a statement he signed and made available to TODAY SPLASH on Sunday in Ibadan, Hon. Adebayo Babajide Gabriel condole with the immediate family of Olubadan, the Olubadan-in-Council and all Ibadan Indigenes, Hon Babajide Describe the late monarch as peace loving, a respectable king who promoted the values, ethos and culture of not just Ibadanland but the entire Yoruba race.

The News of His Imperial Majesty’s demise hit us with rude shock, we can only take solace in the many achievements he has brought to the throne, Baba left at a time his experience is needed the most, but we can only thank God for a life well spent.

Rest On Oba Saliu Akanmu Adetunji, Aje ogungunusi 1, I urge every sons and daughters of Ibadan land to honour him by celebrating his enduring and exemplary legacies, and also pray to God almighty to grant his soul Aljanna Firdaus, and console his immediate family.

Adetunji, who was crowned the 41st Olubadan on March 4, 2016, was born on August 26, 1928 to the family of Raji Olayiwola and Suwebat Amope Adetunji in the Alusekere compound, Popoyemoja, Ibadan.