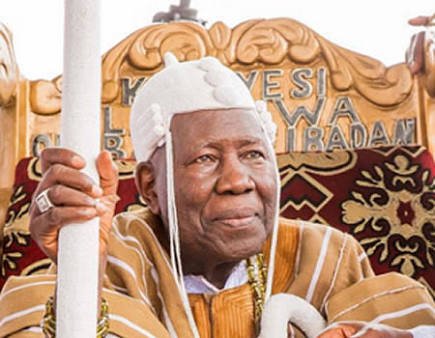 The People’s Democratic Party (PDP) in Oyo state has expressed its deep sadness over the passing of the late Olubadan of Ibadanland, Oba Soliu Adetunji Aje Ogungunniso I, who passed away to join his ancestors on January 2 at a well advanced age of 93.

The party described the late Olubadan as a great rallying figure for the entire people of Ibadanland stressing that the reign of the late monarch brought peace, prosperity, tranquility, and political stability to the Ibadan political landscape.

The Oyo State Publicity Secretary of PDP, Akeem Olatunji, in a press release on Monday January 3 consoled the Oyo state Governor, Seyi Makinde who it described as the chief mourner maintaining that Ibadanland will continue to miss the late Olubadan of Ibadanland because of his love and passion for his people.

The ruling party recalled how the late monarch showed uncommon courage and calmness in the face of unwarranted provocation during his reign when the immediate past governor made frantic move to distort the peace and harmonious relationship among the Olubadan-in Council by attempting to divide the High Chiefs against themselves for personal political gains.

According to the party’s statement, only God knows the crisis Oyo state would have been embroiled in at this point on account of distortion of peace within the Olubadan-in Council traditional institution if not for the frantic and deliberate efforts by those the ruling party described as men of courage who through the court of law sustained and preserved what according to Oyo PDP had hitherto, drifted towards institutional crisis.

“We want to particularly condole the Executive Governor, Engr Seyi Makinde, as the chief mourner being the number one citizen of the state. Just when the Governor was easing up from the pain the emotional pain of losing such a respected monarch as the Sound of Ogbomoso, our baba in Ibadan also left us to be with his ancestors.

“We are particularly and deeply saddened as the ruling party over the passage of our father, our “very own baba” who has continued his sojourn into the great beyond. Indeed, he was a great man, a peaceful and peace loving, very passionate, and calm ruler who will forever be remembered for his peaceful reign.

“He was more than a king to us in Oyo state PDP and in Ibadanland because he was a unifying factor, a rallying figure of note whose large heart was highly profound. It is therefore, safe to assert that baba came, saw, and conquered it all leaving a legacy of peace and tranquility for all of us to protect and sustain as sons and daughters of Ibadanland.

“Baba was absolutely apolitical and would treat politician with same measure of love and passion regardless of political affiliations. He never for any reason meddled politics with his judgement over any matter or crisis affecting politicians and the political landscape of Ibadanland.

“He gave his all for the love of Ibadanland. We truly lack enough words to describe baba, Oba Soliu Adetunji Aje Ogungunniso I, who lived an exemplary life of selflessness, purposeful leadership and provided equal access to justice throughout his reign. Baba, we will forever miss you.

“It is noteworthy to say that the Olubadan-in Council is one traditional institution in the whole of the world that is highly respected because its rich history and order of ascension to the throne right from the very first step as ‘Mogaji’ (family compound head).

“The late monarch showed unprecedented courage and calmness during his reign even in the face of absolutely unwarranted provocation orchestrated by the then Governor during the last administration in order to advance personal political course while disguising such distortion of order as attempting to enrich the prestige of the Olubadan stool.

“It is commendable that during the period, strong men of courage took it upon themselves to slog it out with the then governor and preserved our rich traditional history as well as protect it’s distortion on account of politics and politically motivated moves through the court of law.

“The throne from time immemorial is too exalted for the occupier to be embroiled in anything politics therefore, our joy as the ruling political party knows no bound with the preservation of such rich traditional history.

“Our hearts and prayers are with the royal family especially during this period of mourning the passing of our king and we pray that God grant the deceased passing into eternal rest and the family the fortitude to bear the pain of his passing.” The party’s statement reads.

BREAKING: 3SC Records First Win Of The Season With A 1-0 Victory Against Kastina FC