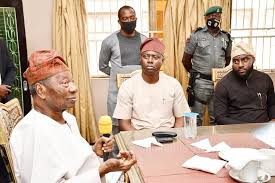 Oyo State Governor, ‘Seyi Makinde, would be paying a condolence visit to the family of His Imperial Majesty, the Late Soun of Ogbomoso, Oba Jimoh Oyewumi Ajagungbade, NewsBreakNG report.

Recall that the monarch passed on to the great beyond on December 12 at the age of 95, after 48 years on the throne.

Though the governor was in Nigeria when the Soun died, he could not personally visit the palace till he travelled for a brief United States visit late in December.

He was, however, represented at the burial of the Ogbomoso monarch by his Deputy, Engineer Rauf Olaniyan who led the state delegation.

He ascended the throne on October 24, 1973. He was born on May 27, 1926, in Ogbomoso to Oba Bello Afolabi Oyewumi Ajagungbade II and Ayaba Seliat Olatundun Oyewumi.