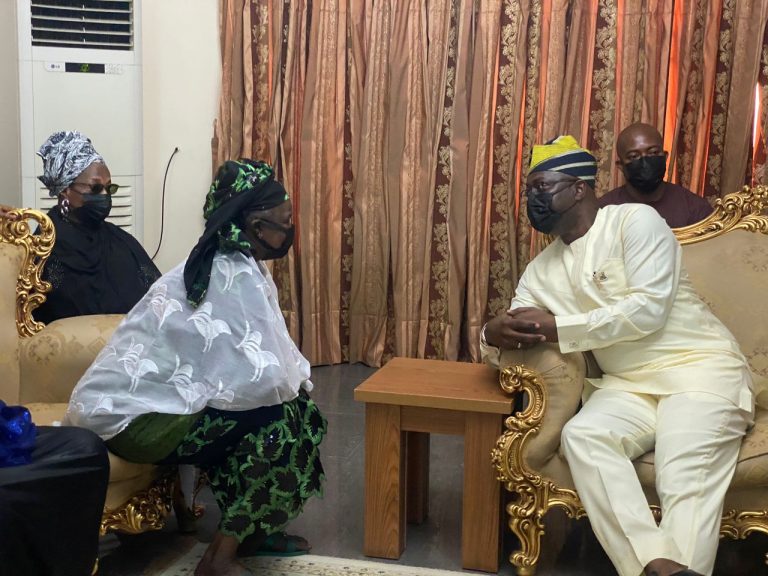 Oyo State Governor, Seyi Makinde has officially condoled with the family of late Soun of Ogbomoso, Oba Oladuni Oyewumi who joined his ancestors on 12th December, 2021.

The Governor noted that the late first class monarch lived a good life and died at a ripe age adding that Oba Oyewumi era would be remembered for the development of not only Ogbomoso land but entire Oyo State.

He described the late monarch as someone who didn’t hide his feelings noting that he would always speak truth to power and that baba would be solely missed for those qualities.

“The purpose of our visit this morning is to officially condole with the family. I want to say that Baba, as old as he was, left a good legacy and did wonderfully well for the development of not only Ogbomoso land but Oyo State.

“I like Baba because he does not hide his feelings. He spoke truth to power. So, we will miss Baba for those qualities.

“Those who don’t want unity and progress for our state have been saying a lot of negative things since Baba joined his ancestors. Some said I did not come to condole with the family because I don’t like the people of Ogbomosoland. The truth is, all those people making those comments don’t know how close I am to the palace and Mama.

“When Baba Saka Balogun and I spoke, I gave him my word that I would attend the 8th-day Fidau prayer since I was not around on the day Baba died. But later, Baba Balogun called me back and said the 8th-day prayer event may not be appropriate for the nature of burial Baba deserves, and that we should take a bit more time and make preparation for the 40th-day prayer and outing. One thing led to the other, I had to travel and I am here today.

“So, those critics are still free to keep running their mouths. Part of the reason I came is that Baba deserves State Burial and, for me as the Governor of Oyo State, that is exactly what I will give to Baba. So, I am here to discuss with the family personally and whatever we agree on is what I will carry out.

“I want to pray that Ogbomoso will continue to progress and the vision Baba had for Ogbomoso land will be accomplished by the grace of God.

In his remarks, one of the children of the late monarch who spoke on behalf of the family appreciated the Governor for condolence visit saying that it was better late than never.

He lauded the Governor for securing the sole ownership of Ladoke Akintola University of Technology, Ogbomoso which was very dear to the late monarch’s heart.

He advised the Governor to act speedily on the installation of new soun of Ogbomoso adding that the vacuum must not be protracted and that a worthy and credible successor should be nominated and approved since the Governor is the ultimate consenting authority.

On the entourage of the Governor were the Chief of Staff, Hon Segun Ogunwuyi and other government functionaries from Ogbomoso land.