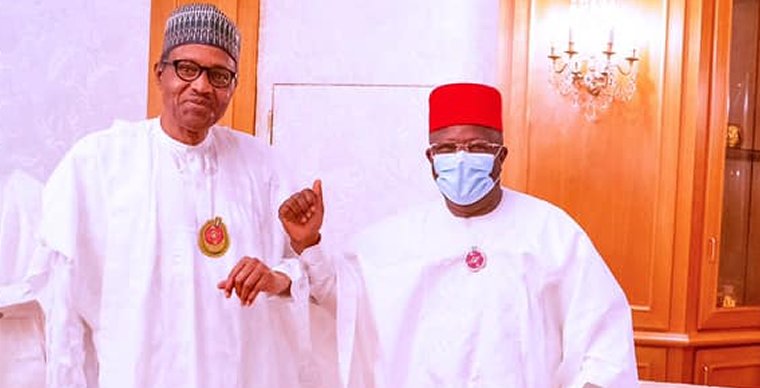 Ebonyi Governor Dave Umahi said he has informed President Muhammadu Buhari of his ambition to contest the presidency on the platform of the ruling All Progressives Party (APC).

Umahi disclosed his latest move to State House Correspondents after a closed-door meeting with Buhari at the Presidential Villa, Abuja on Tuesday.

“I told Mr. President that without prejudice to whatever will be the decision of the party, which we shall abide by, that if the party throws the ticket open or zoned to Southern part of Nigeria that I believe that with what I have put in place in the past six years plus, that I’ll be running for Presidency on the platform of APC.

“So, I told him and of course, he believes that whoever wants to run for President of this country must have to consult widely; go to all the leaders and that we must do everything to remove ethnicity and religion in our politics, so that this country can grow,” he said.

Umahi, who left the People’s Democratic Party (PDP) for the APC, said he stands a chance if the APC throws the ticket open.

He said if he gets the opportunity, his presidency will replicate his efforts in Ebonyi, saying that he has a lot to show in running governance as a business.

When asked what his chances would be, against the background that other big political figures had indicated their intentions to run for the same office, including Asiwaju Tinubu, the Governor said God would be the decider of the outcome of the race.

Asked if he had commenced consultations with various interests to gain support for his aspiration, especially with Southeast stakeholders like the Ohanaeze Ndigbo, Umahi said his first step was reaching out to the President.

On reaching out to Ohanaeze Ndigbo, the Governor categorically said the group ought not to be getting involved in party politics.

“I wouldn’t have done that without first coming to clear with Mr. President that there is this feeling in the Southeast that have not been President and that our people feel that those of our leaders in the various political parties should indicate interest to contest and this is fair, this is important. But at the end of the day, it is God Almighty and the political parties that will also decide.

“Ohaneze leadership should not play politics. Yes, they can speak for the interest of the Southeast, they can speak for fair treatment to Southeast as people, but as a matter of equity, justice and fairness, and leaving a level playing field for all the political parties and the aspirants, they should not dabble into politics of whom to support or whom not to support.

“I think they will hear it just like they heard other political parties’ aspirants. We will also write them to notify them that yes, they have capable sons and daughters that, if God wills, could do this job,” he said.

“I think these two would have been able to speak to the press, if we’re going to have such a meeting on Sunday. So, I was not aware, but I had to inquire from the chairman of APC Governors Forum who wasn’t also aware. So, I’m not sure the meeting held.

“But I read on a newspaper sometimes when the party leadership came to brief Mr. President and they told him February convention and Mr. President said yes. He is not a man that says yes and says no at the same time. He is a man of integrity, he is a man of his words.

“So, I believe that if he ever said February that is going to stick to that February. I am very sure of that, but it is for him to speak or for the party leadership to speak. I speak for my state”, he said.