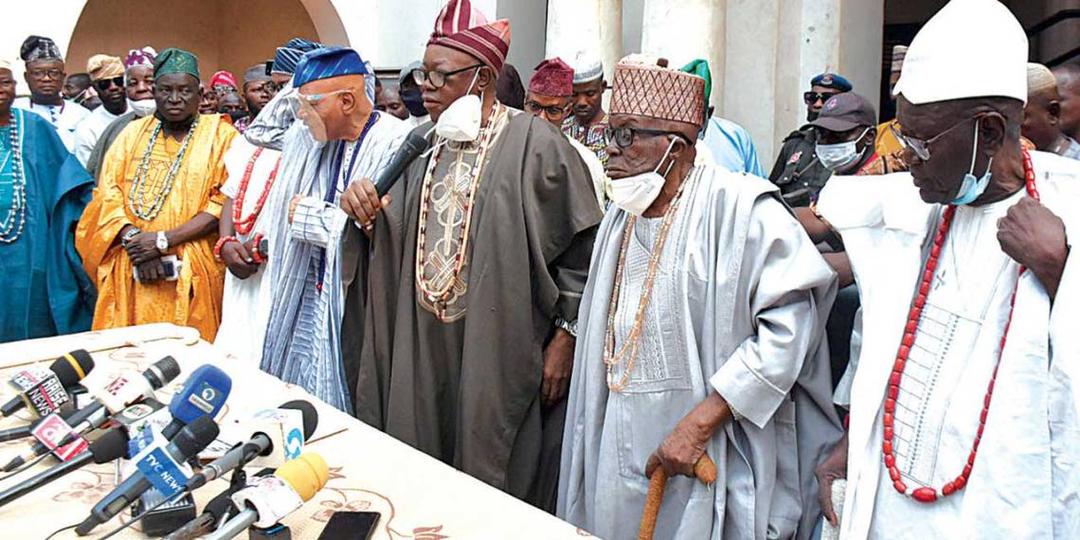 Processes leading up to emergence of the next Olubadan of Ibadan land continued, on Tuesday, with seven members of the Olubadan-in-council physically present at a meeting held behind closed doors at the Olubadan palace, Oja’ba, Ibadan.

Those not physically present at the meeting which lasted for two hours were the Osi Olubadan of Ibadan land, High Chief Rashidi Ladoja and Iyalode of Ibadanland, Chief Mrs Theresa Oyekanmi.

As each of the kingmakers left venue of the meeting, they declined entreaties from journalists to disclose the what was discussed at the meeting.

However, the Otun Balogun of Ibadan land, High Chief Tajudeen Ajibola, speaking exclusively with Tribune Online, said the kingmakers were unanimous in their choice of Lekan Balogun as the next Olubadan.

He said the kingmakers will forward its resolution to the state governor and the next decision will be that of Governor Seyi Makinde.

Asked about the absence of the Osi Balogun of Ibadan land, High Chief Rashidi Ladoja and the Iyalode Olubadan, High Chief Theresa Oyekanmi at the meeting, Ajibola said Ladoja had a choice to attend or not while the Iyalode had forwarded a letter assenting to the decision of the council.

Ajibola said: “The meeting went well; we had no problem. We will forward the resolution of our meeting to the governor. He has the next decision.

“We are trying to do the necessary things as the people of Ibadan expect of us. The governor will get back to the public on the next step.

“We have no dissident; we have no other candidate. The event is to do what is necessary under the law as kingmakers and that is what we have done very generously and without bias.

“The council of chiefs invited Oloye Rashidi Ladoja but it is his choice whether to attend or not.

“When you are invited to a meeting, the choice is yours, since you are not forced to attend a meeting. All I can tell you is that we had a majority at the meeting. Those who were absent were by proxy. The Iyalode wrote a letter to lend her support. We have no problem.

“We did not fight, did not quarrel. We have done all the law expects us to do.

“We will forward the letter to the governor as soon as possible. We have done our part. The rest is left for government officials to forward it to the governor. They will deliberate and if possible, they will invite us and if not necessary, he will come out to the public; he has the last say.”