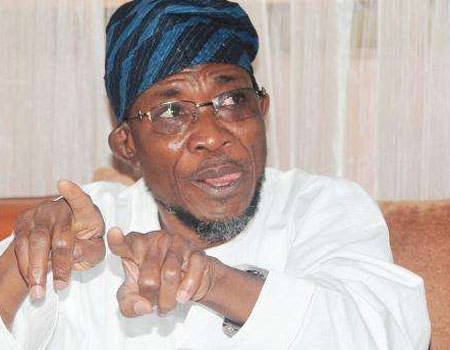 A former governor of Osun State and current minister of Interior, Mr Rauf Aregbesola on Friday came out against the mainstream All Progressives Congress (APC) in the state.

He confirmed his membership of a faction opposed to the incumbent governor, Mr Gboyega Oyetola.

The minister, who made this known at the inauguration of a Digital Nigeria Centre (DNC) at the Muslim Grammar School, Ilesa, pointed out that, there were two factions of the party in the state out of which he belonged to “The Osun Progressive”(TOP) being led by a former state chairman of the party, Mr Lowo Adebiyi and which has Abdulrasak Salensile as its chairman.

The group regularly attacks Oyetola and his government in the media as the state braces up for the governorship election coming up July 16 this year.

Aregbesola stated that his political structure in Osun State remained formidable, stressing that, “the APC is sharply divided in Osun and I belong to the TOP. I am TOP inside out. Salensile is our party chairman, that’s my own chairman. Everybody is doing their own but when it is time, we will reshape the party.

Speaking on the newly inaugurated Digital Nigeria Centre, Aregbesola remarked that “this is truly a laudable initiative aimed at developing digital skill and literacy of our youths in Ilesa community and environs.”