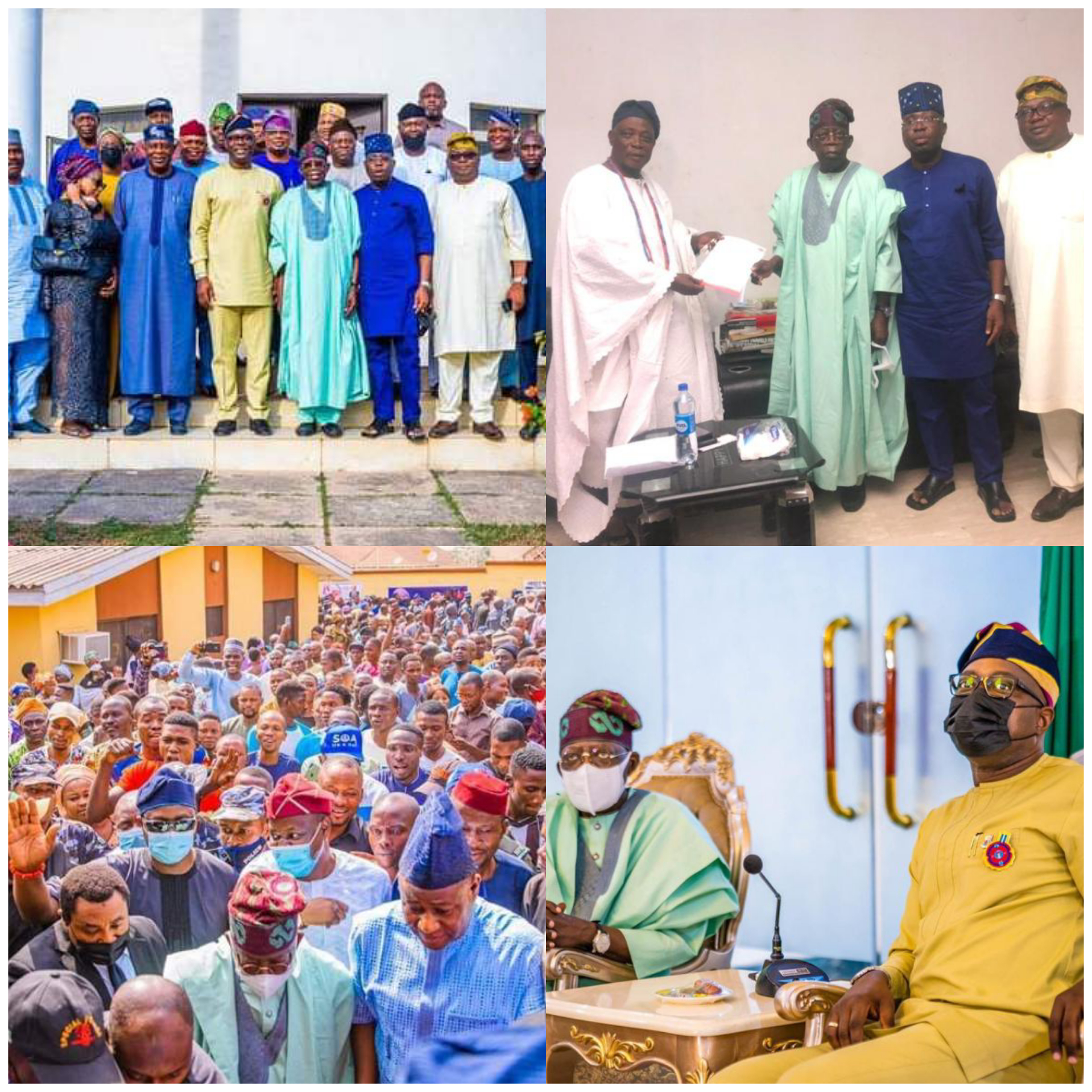 Bola Tinubu also visited Former Governor Rashidi Ladoja and paid condolence visits to the palaces of the Soun of Ogbomoso land, Olubadan of Ibadanland, and residence of the late Governor Alao-Akala, where he sympathised with the respective families.

While speaking at the Government House, Agodi, Ibadan, Tinubu said that the departed traditional rulers – the Soun of Ogbomoso, Oba Jimoh Oyewumi Ajagungbade III, and the Olubadan of Ibadanland, Oba Saliu Akanmu Adetunji, Aje Ogunguniso 1 – as well as former Governor Alao-Akala, would be greatly missed.

A statement by Mr. Taiwo Adisa, the Chief Press Secretary to Governor Seyi Makinde, quoted Tinubu as saying that
the reign of the two prominent traditional rulers was peaceful, adding that the duo contributed to the peaceful atmosphere of the state.

The statement also quoted Tinubu as adding that the late Governor Alao-Akala equally contributed immensely to the political development and the love radiating within the political arena in the state.

The former Lagos governor also commended Governor Makinde for “demonstrating good character” as far as governance is concerned in the state.
He said: “I want to thank you, the governor. It was only last night that I thought of my coming here and we are here today. Having lost a former governor of this state, the Olubadan of Ibadanland and Soun of Ogbomoso, it is just for us to go back to the sense of value of people and their lives.

“With this situation, we share in your loss. You, as the governor on the saddle of power, take responsibility for the situation here. I want to say that we thank God Ibadan has been peaceful and not a den of violence but peaceful.

“Every other thing that has happened has taught us in the book of religion that we are just passing through and we will leave one day. But no matter how long, it is difficult to absorb the loss easily.

“Thank you for being accommodating. We gave you short hour notice and you responded.

“That is a demonstration of a good character, which is rare. People get, sometimes, intoxicated with power and the arrogance of office can be overwhelming, but not with you. Thank you for receiving us so quickly.”

In his remarks, Governor ‘Seyi Makinde, said that the former governor of Lagos State stood for politics without bitterness.

According to him, politicians, we may fight, struggle for political positions, but power can only come from God and He gives it to whomever he likes.

Makinde equally appreciated the former governor of Lagos State, wishing him well in his political endeavour.

He said: “I want to welcome you to Oyo State. We are really grateful for this visit. This is the year political parties will elect their candidates towards the election that is coming next year. So, what this had demonstrated to us is, you stood for politics without bitterness.

“During this political season, you may have to question yourself on why you need to come to the Government House because people might have another interpretation to it. But you sent a message across to me and I was delighted to host you in Ibadan.

“First, it was Soun of Ogbomoso land, and we were planning for the burial when the Olubadan of Ibadanland also joined his ancestors. We were still in the middle of that when former Governor Akala also died. I can see that in Oyo State, we try to take politics out of what we call ‘omoluabi’.

“We may fight, struggle for political positions but we know power can only come from God and He gives it to whomever He will like to give it to at whatever time.

“We really thank you for this visit and want to let you know that we have taken proper notice that you have risen above politics and all that is going around here to come and share with us at this moment that we are grieving. We say thank you.

“Let me also use this opportunity to wish you well in your political quest to govern this nation. We want the best for this country and only the best is good enough at this particular time.”.