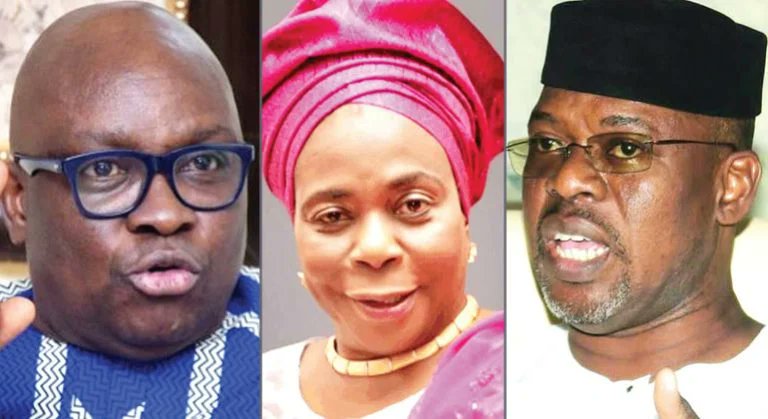 Ahead of the January 26 governorship primary of the Peoples Democratic Party in Ekiti State, ABIODUN NEJO writes that the opposition party has failed to unite its ‘warring’ members and put its house in order

Next week, specifically on January 26, the Peoples Democratic Party, the Ekiti State chapter, will be electing its candidate for the June 18 governorship election among the aspirants jostling for the ticket.

Although the party’s national leadership has yet to announce whether the election will be direct or indirect, the aspirants are working on the delegates especially as the party has always employed the indirect mode.

The PDP, however, may be going to the primary with unresolved issues which the six-member reconciliation committee comprising three members from each of the two warring groups in the PDP in the state may have failed to resolve before the primary.

These include the issue of the state executive; the litigation; and how to ensure there is no post-primary issue. Another is the issue of zoning of the governorship to the South Senatorial District which has yet to produce a governor since the creation of Ekiti in 1996.

The matter got to its head when the then Uche Secondus-led National Working Committee ratified the congresses conducted by the Fayose group, following which the Olujimi group headed to courts. The case is still pending before the Supreme Court.

The Olujimi group is of the notion that the Independent National Electoral Commission, which statutorily should monitor congresses supervised its own whereas the electoral umpire did not monitor Fayose group’s congresses thus making it defective before the law.

To lay all to rest and prepare the PDP a united front for the election, the former Senate President Iyorchia Ayu-led NWC shortly after assumption of office in December set machinery in motion to reconcile the two Ekiti PDP groups following which their leaders had been meeting since.

However, at a time when it was believed PDP was getting out of troubled waters, the fresh crisis that broke out on Saturday showed how bad it might be for the party between now and the January 26 primary and indeed after the primary going into the June 18 election.

Oni said, “Before, we were getting it right. We were talking across all divides and we believed we would end up together, but what has happened today (Saturday) has shown that there is a big problem.”

This was as no fewer than five governorship aspirants rejected the outcome of the Ward Congresses which held that day to elect three ad hoc delegates in each of the 177 wards in the state. The delegates are billed to be among those to vote in the primaries.

The aspirants who kicked on Saturday that the exercise had been compromised, manipulated and hijacked were Oni, Olusola, Olujimi, Aribisala and Ajijola.

Specifically, they were against Fayose, whom they accused of colluding with the NWC Congress Committee to manipulate the process for his preferred aspirant, Kolawole.

The aggrieved aspirants accused the committee of not following due process, alleging that the results of the exercise which ought to hold across the different wards were being fabricated and recorded in a hotel in the Fajuyi area of the state.

But the Secretary of the committee and PDP former National Publicity Secretary, Kola Ologbondiyan, said the panel followed due process in the discharge of its assignment.

“We did accreditation in the presence of all the aspirants and their agents. One of the aspirants was not available, but his director-general was there. We released the electoral materials to the three-member team in conjunction with the Local Organising Committee.

“If there are complaints, the aspirants will have to wait for the appeal committee which will come after this committee to file their petitions. We, as PDP, have our internal resolution mechanism which people can explore. The PDP is a family, we will sit down as a family and take decisions,” he said.

With this, the aspirants might have once again lost out of the contest for ad hoc delegates to the Fayose group, which has the executive whereby many of the delegates will vote in the primaries.

In his remark, Aribisala said, “There is no election. The team from Abuja has been compromised and we are not going to accept this. They are writing results at a hotel in Fajuyi, Ado Ekiti. If you think you are popular, things should be done the way it should. There is no three ad hoc congress in Ekiti State as we speak.”

Oni, who expressed regret that the election materials sent to the 177 wards were allegedly hijacked, described the situation as worrisome, saying he never expected such act to be happening in the PDP, adding, “What you have seen today is laughable. This is the standard we still are as a country. It is very unfortunate. But we hope the party will find a way out of it”.

Olujimi said that Saturday’s exercise was “a repeat performance of the 2020 congresses. And this was how it was on March 7, 2020. That is what we have been fighting for on till now. And it has repeated itself. Everything hijacked and everybody compromised.”

While also speaking at a protest by some aggrieved aspirants including Oni, Akerele, and Ajijola on the streets of Ado Ekiti on Monday, Olujimi urged the party to address the issue, saying it would be dangerous for the party to go to election as it is at present.

It appears the party is haunted by the experience of the 2018 governorship election whereby the internal crisis in the build-up to the primaries was fatal to the cause of the party in the poll where despite being the ruling party, lost narrowly to the opposition All Progressives Congress.

The PDP bigwigs then including former Minister of Works, Senator Dayo Adeyeye and Olujimi, who were aspirants in the 2018 primaries, were discontent with the endorsement by the then governor, Fayose, of his deputy, Olusola, as the preferred candidate for the party ticket. It eventually led to the defection of Adeyeye alongside his teeming supporters to the APC after the primaries.

This time, being in the opposition, the same situation of disunity is playing out as the aspirants are against the role being allegedly playing by Fayose as far as the 2020 congresses and Saturday’s congress to elect ad-hoc delegates.

This is apart from the burden of division in the party with both OPA and Repositioning having several aspirants just as some contenders including former Governor Oni do not belong to any of the groups.

Reacting to the present state of the party, Lere Olayinka, the Director of Media for Bisi Kolawole campaign Organisation, said, “You can be sure that the primaries will hold as scheduled on January 26.

“What happened last Saturday was part of the process. The process has also not ended, there is room for appeal as the party will constitute appeal committee which will sit and attend to those who have grievances.

“Most of those complaining had benefitted from this kind of process. They are only complaining and talking about charade because the system is not in their favour. Heaven did not fall when somebody came third in a primary, became a candidate and went ahead to win the election, but was complaining there last Saturday.

Also, PDP chieftain and former Acting Governor, Tunji Odeyemi, said the present happenings of the party “have gotten nothing to do with the chances of PDP as a political party in the coming election.”

Odeyemi exuded confided in the party’s ability to put the situation under control ahead of the primaries and as well put everybody together after the candidate of the party might have been emerged.

Speaking on Saturday’s congress, he said, “Ordinarily everybody was supposed to go to his or her ward and test his popularity there. But unfortunately, it did not happen that way. That is the unfortunate aspect of it.

“It is a common thing that can happen in any political party. It is purely internal affairs of the party. It is now the turn of the players and the leaders to see how they could handle the situation. The leaders and the stakeholders, especially the aspirants are up to the task. They are already meeting as to how they will get out of it.”

As the crisis persists, analysts are watching if the opposition party will put its house in order and present a united front in a bid to wrest power from the All Progressives Congress.

Why I Lost PDP Primary In Kogi — Dino Melaye

I Got Into Trouble, Left Nigeria For Supporting #EndSARS Campaign –...