Between Et tu And Etutu 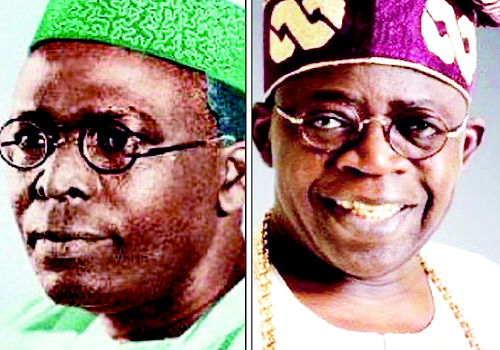 To be trusted is a greater compliment than to be loved,” George MacDonald.’

Some commentaries in the past two weeks about why some Asiwaju Bola Tinubu’s associates are looking the other way have reminded me of childhood. As a little boy, my father Moses was lost in the ecstasy of My Early life, Chief Obafemi Awolowo’s autobiography. Every evening while he clutched and read that cannon of book, he belched out his praises like a soulful incantation, like a man in a rally of one. “Awo,” he would say in reverie in his white singlet presiding over his Niger Delta wrapper presiding over his bare, light-skinned feet.

In the twilit veranda of our Ibadan flat at Oke-Ado, he would tell me, for lack of a mature audience, that Awo was a man without fear and of principle. The other thing that fascinated him was Awo’s single-minded resolve to scale any odd on his way to enlightenment and formal education. Awo’s main virtue, in my father’s closeted eulogy, was courage. My father, who would rather fall than faint in his belief, saw himself in Awo.

As Parents do, Moses Omatseye planted a seed in his son without knowing it. Decades later as a history student at Ife, his name rose to reckoning in our forays into Nigerian history. It was there I learned he was a besieged genius and methodical mind with a deeper glue to history and philosophy and he unrolled a template for Nigerian development that has haunted his nation like Banquo’s ghost even decades after his passing.

The snag for me was that he lived among judases, and I wanted to know why. I wanted to know why some wanted to march him to Golgotha when he cleared a path to light. So, in my final essay, I decided to write on the western region crisis. In a long holiday, I secured access to the Daily Times library. I travelled in time on the pages of the paper, day after day, as the western region descended from worry into war, how associates were parting ways with the man who had already tenanted his genius in the west.

Political scientists like Dudley, Kenpost and Sklar, wrote lucidly about the Awo years. I still believe his life, especially the brio and quicksand of his engagements, is still underwritten. He did not write enough of his life and political times. Poet Odia Ofeimun has tantalised us for years about an opus. Just as Ojukwu teased us in vain.

What still remains to be written, I think, is the ideological and psycho-history of those years. It will also be good to see a novel or play or epic poem of his years. Then we shall understand that Awo’s life mirrored the eternal treachery of Nigerian politics. Many left him, and they are big names in our history even today. The list is almost endless. Not just Akintola with his theatrical wife Faderera. Not just Ayo Rosiji, ines. We knew names like Adisa Akinloye, Gabriel Akin-Deko, Remi Fani-Kayode, Sikiru Shitta-Bey, Lamidi Adedibu, Busari Adelakun, S.G. Ikoku, Philip Umeadi, Anthony Enahoro, Arthur Prest, Oduola Osuntokun, to mention a few.

I wanted to know if it was because Awo veered from his principle. I saw no such evidence. When the Action Group was formed, he enunciated the ideology. It was democratic socialism, and he engrained them in programmes that we know today. All those who left him said they left him based on principle. That, I have found out, is the most bastardised word in Nigerian political history. All those men, including F.R.A. Williams, who played reconciler in the heady days of the 1962 crisis, also left. Some left when they thought the path no longer led to nirvana. Some left much later. All of them said they left because of principle. But we know that Awo never changed his skin. He was the leopard of ideas. They were the amoeba. They changed by conjuring the word principle, and they glowed under its false light. That shows two things about Tinubu and politics. One, defection does not make the defected guilty. Two, the defector has to show that he or she is acting on principle. The principle is not the choice to leave, but the clarity of why. Principle becomes a platform for phonies. That was not Awo’s headache. It is not Tinubu’s headache. Neither Awo nor Tinubu changed. If they claim he did, they owe the public an essay on the reasons based on facts. When Judas left Jesus, he did not say Jesus compromised. He wanted his 30 pieces of silver.

Winston Churchill was in Liberal and Conservatives parties at different times. That was because he was a liberal who had imperialist fantasies. He articulated his contradictions. Life abides it. But it must be known. Hence, he said, “Anyone can rat, but it takes a certain amount of ingenuity to re-rat.” Awo quoted that line during the carpet crossing in the west. We need to see an ingenious explanation for cutting and running. The alternative is to keep silence.

It is clear from Awo’s defectors that they never believed in the ideology in the first place. They may have acted with sanctimony in their own sanctuary then, or holy in their own folly. But we know it was because of ego in English and what the Igbo call ego. Both ‘egos’ conjoined in the guise of principle. Stomach infrastructure is not only for the poor. There are different levels: infrastructure for the rich and the poor.

No one should mistake service for servitude, or vice versa. Neither should anyone see sacrifice as sacrilege because service comes with some sort of sacrifice. At certain points in our lives we must serve but we should not become traitors in order to get along. The Latin phrase Et tu, means “you too” in the famous Shakespearean play, Julius Caesar. Brutus canonised ambition over loyalty. In Yoruba, the word etutu means sacrifice. Etutu should never get to sacrilege or servitude, but it should not lead to Shakespearean Et tu. In his play, Death and the King’s Horseman, Soyinka’s horseman would not forgo sensual bliss to die with his master, even though that was the agreement. When Etutu fails, it becomes et tu. Devotion waxes into betrayal. I recommend Charles Dickens’ Dombey and Son, where the most trusted James Carker ends in tatters after a lifetime of trust and devotion.

We saw the same thing in the M.K.O. Abiola saga. Some who thought Abiola could not stand up to Abacha were disappointed. Some played Judas and decided to stay with Abacha and they were demystified, including the late Lateef Jakande, Ebenezer Babatope, Olu Onagoruwa and Iyorchia Ayu. Ayu is the one who has gotten a new life, a man fired twice as cabinet minister, once under the soldiers and then after under a soldier masquerading himself as a democrat.

They were worse than Judas. They were like the 30 pieces of silver, which neither the taker nor the giver wanted. But they have been hanged, like Judas.

The casualty is often the facts. It is important, as we enter a political season, that we trade on facts. We should hang nobody on a lie. A big lie was exploded at the weekend by Segun Ayobolu, so we should not turn fiction into a vehicle for hate.

It is clear many do not understand Nigerian history, not just the history of a century ago. I mean history of just 10 years ago. Hence, I wrote my piece last week titled: A Lagos original, about what happened under our very eyes and many people across the country and the world responded with genuine surprise at the facts.

When persons rise under the shadow of one man and turn against him, they mouth principle, but they forget they had principle when he fed and clothed them and made them shine to the neighbours. Now that they have grown, they remember he had mouth odour, his shoes are dirty and does not know how to dance.

From those who left Awo, we know they did not belong. They were wayfarers. None of them propagated the AG idea till they died. A man like Enahoro stunned many. But in his twilight, he had an ideological epiphany. He abandoned those he left Awo for. If Awo were alive in the democracy ferment of the 1990’s, they might have worked together under the sultry roof of the progressives. The same way, some who left Tinubu have returned with the glory of prodigal sons.

Some of them who worked for Nigeria’s democracy must remember those who fought and who didn’t. Tinubu, for instance, never forgets. Few know that, on his initiative and arrangement, Abiola’s wives are taken care of up till today since the husband died, even if one of the children can raise hairs on the airwaves as though the former Lagos State governor was a pariah to the family. Few know that when Abiola’s Concord Newspapers ran into financial peril, the company wanted to sell its generator to keep afloat. Tinubu, as governor, offered to buy the generator for the state’s water corporation for over N30 million then. Some of the family members balked and stamped caveat emptor on the property. Lagos State Environment Commissioner Tunji Bello, then the newspaper’s editor, can testify to this. A newspaper with an equivalent of that sum today may be hoisting hundreds of millions in a grateful purse.

Awo said he did not compromise, if Jesus or Mohammed compromised, they would not have the following around the world. The buzz word should be compromise. So people who evangelise principle should not conflate liberty for personal licence.