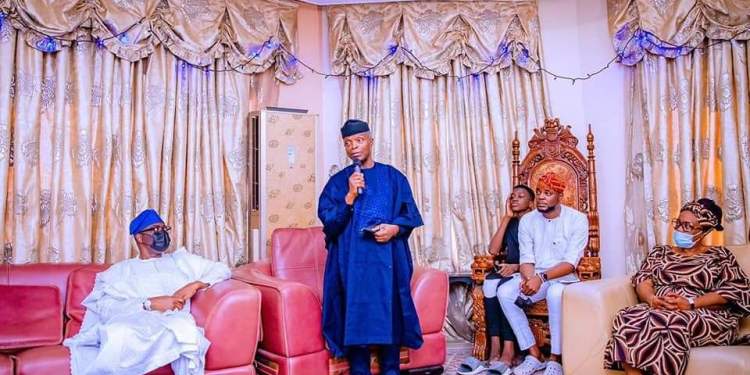 Mr Osinbajo made the remark during a condolence visit to the family of Mr Alao-Akala in Ogbomoso, Oyo State.

The News Agency of Nigeria (NAN) reports that Mr Alao-Akala, also an All Progressives Congress (APC) leader in Oyo State, died on Jan. 12.

The vice president was accompanied by Oyo State Governor Seyi Makinde, some National Assembly members and others.

“We have profound memories of him, a man who was exceedingly generous.

“He was a titan in politics. He was a very generous, kindhearted and decent man,” the vice president said.

Mr Osinbajo recalled how he and Alao-Akala’s nephew, Prof. Oyelowo Oyewo, used to go to him for pocket money.

“Long before I became a Professor of Law, I had known our dear uncle Adebayo Alao- Akala.

“Any time I think about him, I smile because he was a very special being.

“Prof. Oyelowo Oyewo, the current Commissioner for Justice in Oyo State, was our link to him.

“If we needed little pocket money, we found a way of getting to our dear uncle. This was even long before he became Governor of Oyo State,” Mr Osinbajo said.

He also recounted how generous Mr Alao-Akala was with advice, time and resources.

According to him, in 2015 when he was nominated as the Vice Presidential Candidate of APC, one of the people he consulted was Mr Alao-Akala.

“It was Prof. Oyewo, my friend, who arranged a meeting between us in Ikoyi and he gave me advice.

“He said, ‘Professor, the vice-president’s seat is not a child’s play.’

“He was so generous, he gave me much advice and much support,” he said.

Mr Osinbajo commiserated with the family, praying that all that Mr Alao-Akala left behind would prosper.

“No one can know the extent of your pain and sadness. Only God can comfort you and keep you,” he said.

He also prayed that Mr Alao-Akala’s children would be greater than he was.

Others in Mr Osinbajo’s entourage were Senator Abdulfatai Buhari, Segun Odebunmi, some members of Osinbajo Grassroot Organization, and some APC chieftains in Oyo State.