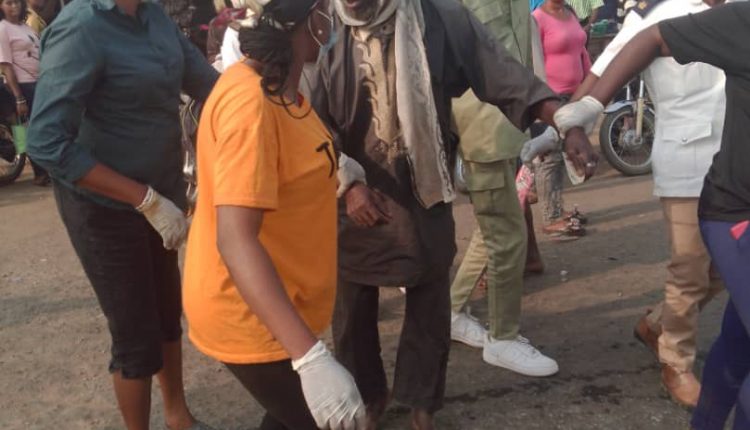 … plans to provide another resettlement facility

The government of Oyo State, on Wednesday, again evacuated over 400 beggars and destitute within Ibadan metropolis.

It equally declared its plans to provide another resettlement centre for the beggars and destitutes in the capital city.

The State Commissioner for Women Affairs and Social Inclusion, Alhaja Kafilat Olayiwola, stated this when she led the raiding team on evacuation of beggars and destitute from Jemibewon/Mokola/ Sango University of Ibadan main gate.

Other areas captured during the evacuation exercise include: Challenge/Oja’ba, Oje/Bodija, Iwo road/Gbagi and Basorun Akobo routes.

While speaking with the journalists shortly after the exercise, Commissioner for Women Affairs and Social Inclusion, Alhaja Olayiwola explained that the government is hell bent in returning sanity by ensuring that beggars and destitute keep off the streets and roads.

She said: “The government of the day is not interested in seeing destitute and beggars on our roads without being fed and looking battered. As a result of this, the government provided a settlement for them, where they can be well fed, given proper health care and enjoy other facilities but we still discovered that they go outside to beg and do other things that this government seriously frowns at.

“Yes, the government is planning to provide another settlement area for them apart from the one here in Akinyele.

“Though we have returned some of these beggars, who have been rehabilitated back to their families, having taken their profile and know where they belonged.

“The next thing we are planning to do now is to employ security guards to take control of the gates so as to prevent them from going outside to beg for alms.

“When we went out today to raid markets and neighboring streets, we were able to evacuate over 400 of them back into the settlement the government has provided for them and we are still expecting more.

“We all know that the focus of this administration is to ensure the lives of the less privileged are improved upon and that is what it has been doing.

“The destitute and beggars in Oyo State need care, affection, rehabilitation and resettlement. All these have been taken care of by the state government. But despite the care and comfort being given to them at the resettlement centre in Akinyele, we have observed that some of them are very stubborn to the extent that they still stray back to the street but the government is hell-bent in ensuring that they stay at the provided centre.

“We want to make sure that we enforce the law and implement their full stay in the centre. The government will continue to do this as we now raid in the afternoon and evening hours. So, we are ready to tackle the stuborness of these destitute.

“Also, we sincerely appreciate the level of cooperation of the citizenry on this development. They have been so supportive and we will continue with the exercise until they comply with the orders of the state government.”

Also speaking, the Permanent Secretary, Ministry of Women Affairs and Social Inclusion, Mrs. Christiana Abioye noted that necessary attention and more facilities have been provided for the evacuees to make it more habitable and conducive for them.

“We see no reason why they should not stay here just as the government has directed.

“We will not rest on our oars until we rid them off the state totally,” She added.

Meanwhile, a resident of Oyo state, Mr Wasiu Gunwa, expressed joy on the evacuation exercise, as he affirmed that the beggars create all sorts of problems in the environment.

He prayed for the government to do more so as to ameliorate the challenges of the less privileged.