HomeHOMEYour Faces Are No Longer Needed in Guinea, Refund Monies Spent On...
HOME

Your Faces Are No Longer Needed in Guinea, Refund Monies Spent On You Towards Ongoing African Cup of Nations (AFCON)— Guinea Head-of-State Tells Players 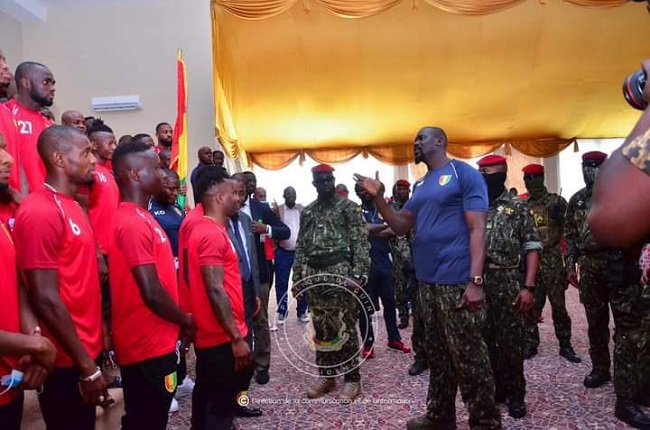 Guinea Head-of-State, Colonel Mamadi Dumbuya Tuesday made good his threat to force players of the national team to refund monies spent on them in preparation for the ongoing African Cup of Nations (AFCON), Cameroon 2021.

While reacting to the ouster of Syli Stars by Gambia in the Round of 16, Colonel Doumbouya said: “You have not shown pride or hunger to win, a disgraceful performance has let down 13 million Guineans. Those that play abroad should connect to their clubs, your faces are not needed in Guinea at this moment. I am very much disappointed because you lost to a team that is not superior to you”

Before the commencement of the ongoing AFCON 2021 tournament, Guinean Military president Colonel Mamadi Doumbouya, warned the Syli Stars (Guinea’s national team), to either win the tournament or refund the money spent on preparing them for the showpiece.

Mamady Doumbouya is a Guinean military officer serving as the interim president of Guinea since 1 October 2021 following a coup d’état staged on 5 September 2021 that overthrew the previous president, Alpha Condé.

Speaking at Palais Mohamed V de Conakry during handing over the national flag to the players of Syli Guinea before their departure for the AFCON 2021 in Cameroon, Col. Doumbouya’s message was clear: “Bring back the African Cup of Nations or if not bring back the money that was invested in you”.