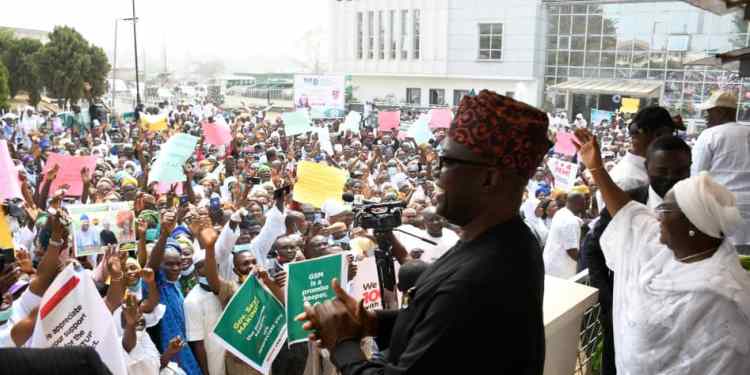 Hundreds of African Democratic Congress (ADC) members on Friday, thronged the Oyo State Government Secretariat, Agodi Ibadan, to pay a thank-you visit to Governor ‘Seyi Makinde over the fulfillment of the agreement made to the party during the last general election.

They promised to continue to support the government, noting that the party will pay back the governor with good deeds in return for what he did for it.

A statement by the Chief Press Secretary to Governor Makinde, Mr. Taiwo Adisa, indicated that the governor appreciated the firm support of the ADC, stating that he will continue to run a people-oriented government.

He equally assured that those who are yet to derive benefits from the government would be reached in a short while, saying: “During the last campaign in 2019, part of the agreement we reached was to run this government together and I am happy that we are all running it together.

“Also, I can remember that I told everybody that worked for my emergence as governor that I may not be able to satisfy them at a go but I will keep trying my best and doing the needful wherever we need to as the administration progresses.

“Let me also say that if some are afraid that they are yet to benefit from this government, and considering the fact that only 17 months are left to round up, all I can say is we can still achieve something significant even with the little time remaining for us. See, the government we are running is a people-oriented and we will continue.

“On the day I was sworn in as the governor, I relieved the local government chairmen of their duties, and we started a court case on the issue. That was not the first time such a thing had happened in this state. However, we know what a particular administration did; they withheld the entitlement of those who failed to join their party.

“But for our administration, we believe the government will always come and go but our state will remain. So, we are being guided by the fact that we may have differences politically but we must do what is right.

“In the beginning, I met with the former chairmen (before they got sacked) to see how we could try to settle the row internally but they disagreed and settled for the court case. So, I had to go with the same option since I knew it would end one day.

“I did not ask them to come into our own party and I approved the sum of N1bn for them as part of the payment of their entitlements. “The good thing is that the money we gave to them will be spent here in Oyo State. So, by the time they finish fighting over how to share it among themselves, they will still come to the market to buy one or two things from our Iyalojas.

“We did not coerce ADC members to defect to our PDP before we gave them what is due them. We gave them commissioners and other slots.”

Responding, Senator Monsurat Sunmonu, who led the ADC members, promised that the party will pay back the governor with good deeds in return of the favour done to its members.

She said: “When we started, we got slots for commissioners, Special Assistants and Supervisory Councillors. We got for Chairman and Secretary alike. We have a book we are using in distributing the positions.

“When we were given, we called a meeting at our usual spot and decided to share it with each local government. Let me read all we to; 42 slots for Special Assistants, 8 slots for Secretary, 36 for Supervisory Councillors and 24 for councillors. “Where we were all coming from was a war zone and we never expected a better administration like this one. “So, has the administration kept its promise or not?

“Some people are saying if you are not a member of this group you would not get anything, but we are standing on the agreement we made to see if they would be honest or not. What does one use to pay good? Good.”