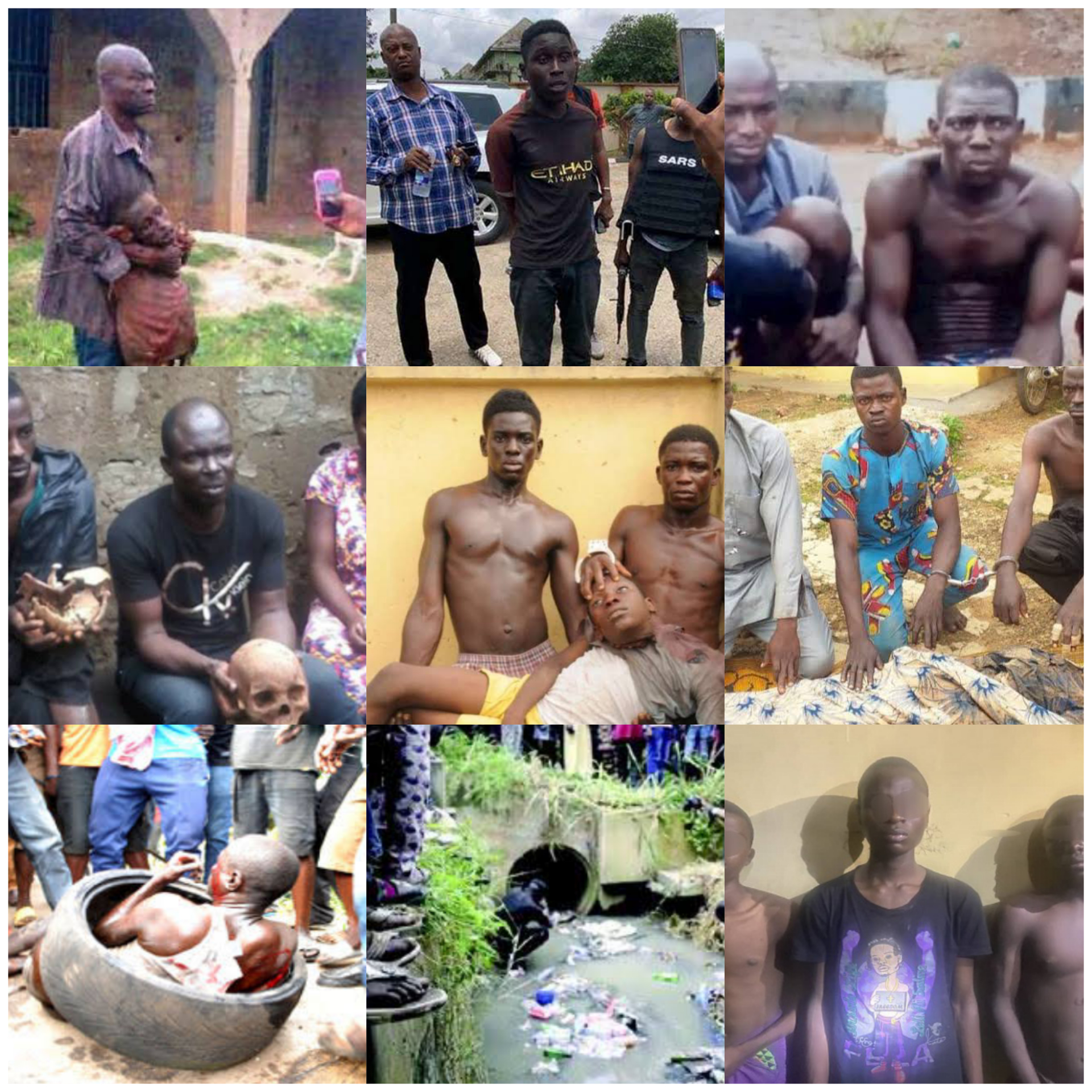 As Nigeria continues to witness various forms of criminalities, ritual killings are taking troubling dimensions in the Southwest region of the country. While ritual killings happen in all parts of the country, reports suggest that the south-west accounts for a large per cent of the killings.

Reports also revealed how Police have been arresting suspects virtually on a monthly basis for alleged involvement in killing people for ritual purposes in Lagos, Ogun, Oyo, Osun, Ekiti, and Ondo.

Aside from arrest of suspects by security operatives, pictures of people losing their lives in the most unexplainable manner to perpetrators of ritual murders flood the social media on weekly basis.

The criminalities, according to some arrested suspects in the past, are triggered by desperation for quick riches and the usual suspects have been people believed to be clerics, popularly called Alfas, Pastors and Herbalists.

In a recent arrest in Abeokuta, capital of Ogun State, a suspect told security operatives that they refer to human heads as balls, hearts as transformers and hands as fans.

The International Committee of the Red Cross (ICRC) in 2017 declared over 10,000 persons missing across the states amid increasing spate of ritual killings.

Today’s Splash reviews some of the reports on ritual killings in the region.

Ritual killers adopt various ways to carry out their activities. Some choose to kidnap their victims from various points, and others pretend to be commercial bus operators. They take their prey to either a forest or underneath drainage, in uncompleted buildings  in deserted areas.

One of many examples was reported on March 24, 2014, when a kidnappers’ den was busted in Soka community, Ibadan, Oyo state. The kidnappers were exposed by commercial motorcyclists who were searching for two of their colleagues after they took passengers to the community but didn’t return.

Following the discovery of the kidnappers’ den, hundreds of people across the country whose relatives were missing visited Ibadan. Sadly, some were able to identify their loved ones.

In another development, the search for a missing 23-year-old job seeker, Precious Omorodion, ended on a tragic note with  the discovery of her decomposing  body in  a suspected ritualists’ den in Ota, Ogun State on July 27, 2015.

The Police also uncovered a ritualists’ den in Iyana-Ilogbo axis of Sango-Ota area of the state, where they discovered decomposing bodies and arrested two suspects on April 3, 2016.

A suspected ritualist,  Tunde Jimoh, March 30, 2017, gave a chilling description of how he and his gang members abducted a victim, Akintoye Oyeyemi, and took him into a deep forest for murder.  They later took the body to a Muslim cleric to prepare concoction for money rituals for him.

In a nutshell, the wrists, heart and legs of the victim were cut off but luck ran out on the suspect while on his way to dump the body in the bush.

On Aug. 17, 2017, the lifeless body of a four-year-old girl was seen at a shrine at 28 Ogbe Close in Iwaya area of Lagos, with her throat slit. The victim was reportedly used for sacrifice at the “Ogun” shrine. Many years later, perpetrators are yet to be apprehended.

Following their alleged involvement in ritual killings,  two people were killed by a mob in the Mushin area of Lagos on Aug. 30, 2017. Some members of the Oodua People’s Congress (OPC) were said to have led a search team into a tunnel and found hundreds of syringes. The tunnel reportedly linked different parts of the community.

On Oct. 7, 2017, six persons were arrested for allegedly killing people for ritual purposes at different locations in Ogun State.  Two of the six suspects were caught with a bag containing fresh and dried human parts.

There was also a high number of reported cases of ritual killings in 2018 and 2019, including the surge in the killing of residents by members of a dreaded cult group identified as Badoo Boys in the Ikorodu area of Lagos.

Hundreds of people were killed by suspected members of the cult group. Their modus operandi included storming victims’ residences while sleeping. They often smash their heads with a grinding stone and after which they use a handkerchief to clean the blood and brain before leaving the scene.

One of the suspects confirmed that each handkerchief stained with blood was sold for N500,000.

The Akinyele Local Government Area of Oyo State was under siege during the peak of COVID-19 in 2020. In less than four week, five persons were killed by suspected ritual killers in different communities of the local government in June 2020.

Barakah Bello, a female student of the Department of Science Laboratory Technology (SLT), Federal College of Animal Health and Production, Moor Plantation, Ibadan, was reportedly raped before being killed on June 1, 2020.

Another student identified as Grace Oshiagwu was raped and killed in Ibadan on June 14, 2021. The deceased was a National Diploma student of The Oke-Ogun Polytechnic, Saki.

The confirmed murder of another victim, Azeezat Somuyiwa, in the same local government in June 2020, forcing the Commissioner of Police in the state, Nwachukwu Enwonwu, to relocate his office to the area.

On Aug. 14, 2020,  Ondo Police arrested two people for alleged involvement in ritual activities after using the menstrual pad of a 20-year-old girl for ritual purposes. This was followed by killing of Rotimi Olukoju, a guard with a microfinance bank whose head cut off at Okia area of Oka-Akoko on Octo. 29, 2020.

On Dec. 7, 2020, Police busted a ritualist den allegedly operated by two siblings identified as Monsuru Tajudeen and Lawal Tajudeen, located around Yemoja area in Iwo, Osun state. They were apprehended after a phone belonging to a missing person was tracked to one of the suspects. Corpses were also discovered in the suspects’ house.

Meanwhile, there is an ongoing controversy surrounding the death of  Timothy Adegoke, a Masters student of the Obafemi Awolowo University, who was reportedly killed at Hillton Hotel in Ile-Ife, Osun State, and secretly buried late last year.

It is, however, ridiculous to read on the pages of newspaper that human parts are being sold as cheap as N500. This is despite the fact that right to life is guaranteed in section 33 of Nigeria’s 1999 constitution.

Despite the legal provisions against killings, ritual killers fearlessly engage in the ugly business for penny.  For in stance, when police arrested Sunday Shodipe, a 19-year-old suspect of several ritual killings in Ibadan in 2020, he said his price was N500 for each of the six persons murdered.

In June 2017, two suspects arrested for killing of a 400-level student of the Osun State University, Rofiat Damilola, confessed to kidnapping and selling her to a herbalist for N10,000. Her mutilated bodies were later found with vital parts missing.

Some suspects arrested in Ibadan September 2021 reportedly said humans parts are sold between N4,000 and N100,000. In fact, they admitted selling the body of their last victim for N4,000.

As part of efforts to curb insecurity in their region, southwest governors  launched Operation Amotekun with fanfare in January 2020.

The governors – Rotimi Akeredolu of Ondo, Seyi Makinde of Oyo, Dapo Abiodun of Ogun, Babajide Sanwo-olu of Lagos, Gboyega Oyetola of Osun and Kayode Fayemi of Ekiti announced the establishment of the security outfits after their respective state Houses of Assembly passed the bill for their establishment into law.

While residents have applauded the efforts of Amotekun in securing local communities in the region, cases of ritual killings remain alarming.