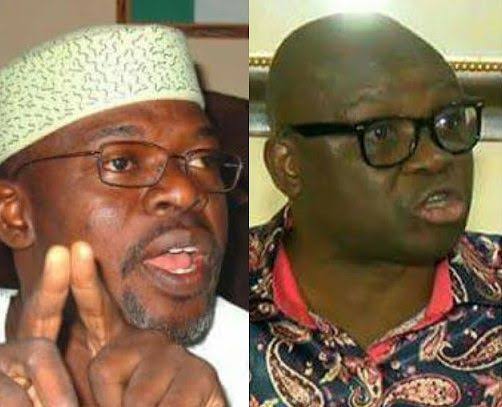 A former Governor of Ekiti State and Peoples Democratic Party governorship aspirant in the state, Chief Segun Oni, has accused former Governor Ayodele Fayose, of selling out the party’s candidate to the All Progressives Congress.

Oni also took a swipe at the PDP National Working Committee led by Iyorchia Ayu for having hurriedly ratified the outcome of the governorship primary election, which he alleged was conducted in shoddy and abysmal manner.

In a statement in Ado Ekiti on Sunday titled, ‘Kolawole is APC candidate’s duplicate copy – Oni’, the Director-General of Segun Oni Campaign Organisation, Yemi Arokodare, stated, “The candidate of the PDP and Fayose’s protégé, Bisi Kolawole, can be best described as a duplicate copy of the APC candidate in the June 18 governorship election.”

Arokodare, who alleged that the outcome of the “flawed” PDP governorship primary in the state was orchestrated by Fayose to sell the party to the ruling APC, said, “It is an open secret in Ekiti political circle that the PDP ticket handed over to Kolawole is a duplicate copy of the APC ticket, it won’t produce any useful result.

“It is a big shame that the PDP NWC could not see through this deception, but deliberately connived with Fayose to force Akwa Ibom State Governor Udom Emmanuel on the Ekiti process to achieve a predetermined hatchet job.”

The campaign organisation challenged Ayu to, in line with section 45 (a) Part VI under the General Provisions of the Electoral Guidelines for Primary, explain why he allowed Emmanuel to come for the second exercise in Ekiti.

But Fayose’s media aide, Lere Olayinka, who dismissed the allegations, said, “The PDP has produced a governorship candidate in the person of Kolawole. Those who had issues with the conduct of the primary had made presentations to the appeal panel. The panel has affirmed the result of the primary election.

“If anybody is saying another thing, he is on his own. The level now is that we wish and feel that everybody in the PDP including Engr Segun Oni will work together to ensure the victory of our candidate.

“Kolawole went to Oni’s house at Ifaki Ekiti on Thursday and was told that he was not at home. Our candidate has visited other aspirants; we are talking to our people so that all of us can come together and win this election for PDP and for the people of Ekiti State.