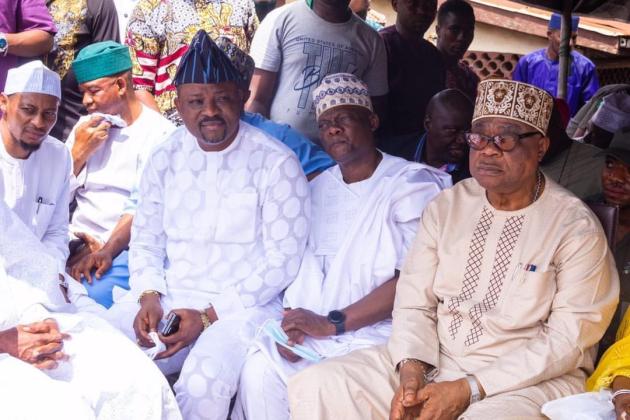 The member representing Ibadan North Federal Constituency of Oyo State in the House of Representatives, Prince Olaide Akinremi, has called on members of the All Progressives Congress (APC) in the state to unite and win the next general election to honour the memory of the late former Governor Christopher Adebayo Alao-Akala.

Hon Akinremi popularly known as Jagaban made the call in a statement he signed and made available to newsmen, on Monday.

Akinremi, who is also a member of the National Caretaker and Extra-Ordinary Convention Planning Committee of the APC, lamented that the death of Chief Alao-Akala had added to the leadership void the APC was trying to fill in the state.

He said: “Coming together and working in unity to defeat the Peoples Democratic Party (PDP) in the next general election is one way of honouring the late HE Alao-Akala, a man whose demise is a loss I take personally considering the various graceful roles he played in the period of time I became acquainted with him.”

Hon Akinremi, who also mourned the death of Mrs Angela Nwaka Folarin, wife of Senator Teslim Folarin, commiserated with the Alao-Akala and Folarin families over the losses and noted that “though death is inevitable, as all of humanity shall eventually bow to its cold hands, the loss of someone so dear is always a huge blow and the pain that comes with such is unquantifiable.”

The Ibadan North Rep described Alao-Akala as “humility personified, generous and expressly kind” and noted that “he was phenomenal in human relations, and his love for people was unparalleled. He was uncommon in his ways and was friendly, open and accommodating at all times. He was indeed a great example of humanity.

“His sudden demise has added to the leadership void we are currently scrambling to fill as far as the Oyo State APC is concerned, and sadly we have lost Alao-Akala at a time when we relied on his wealth of experience for guidance on critical issues that affect our party in Oyo State.”

According to Akinremi, Alao-Akala was a man who loved Oyo State dearly, and one who pursued the best for our state at all times, saying “his death is a colossal loss as far as the Oyo State political terrain is concerned, as he was a man with wide and interconnected political reach. He will certainly be missed by all political gladiators and stakeholders.”

In the same vein, he described the late Mrs Nwaka Folarin as “a respectful, humble and accommodating woman, one whose love for people was profound, and who was known to radiate warmth and happiness at every point of interaction with people.”

Akinremi noted that only God Almighty had the capacity to truly console the families of late Otunba Alao-Akala, and Senator Teslim Folarin at this difficult time, as the deaths of their loved ones, are quite sudden and deeply heartbreaking.

He prayed for the repose of the souls of Otunba Alao-Akala and Nwaka Folarin, while also praying for strength and fortitude for their families to bear their irreplaceable loss.