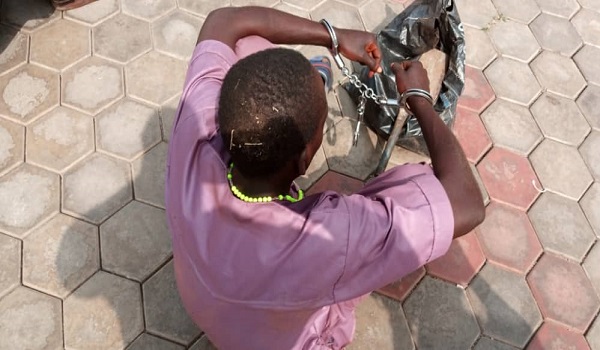 A truck driver identified as Timothy Odeniyi has said his former boss promised him the sum of N30 million to deliver human parts for ritual purposes.

Odeniyi was arrested on Sunday with human parts by operatives of the Ondo Amotekun in Ondo Town, headquarters of Ondo West Local Government Area of the state.

He confessed that he was promised N30 million to deliver the human parts in Lagos State.

Odeniyi said he used to be a truck driver with a brewery company and that it was his former boss in the waste section of the company that asked him to carry out the act for the purpose of using it for money ritual.

“I went to the burial ground to cut the legs and hands of one of the bodies buried there. Before I was caught, I had planned to take the human parts to Lagos to deliver them to the person that sent me for them. He promised to pay me N30 million once I deliver the items.

The commander of Ondo Amotekun Corps, Akogun Adetunji Adeleye, said the suspect killed his victim before severing the parts and buried the victim in a shallow grave.

Adeleye, who paraded suspects arrested for various crimes ranging from kidnapping, robbery and ritual killings, urged parents to caution their children on where they follow their friends to.

He said the investigation has commenced into some cases of people that followed their friends to somewhere and didn’t return but refused to give further details.

Makinde’s Respect For Institutions, Has Brought Normalcy To Our Cherished Traditional...