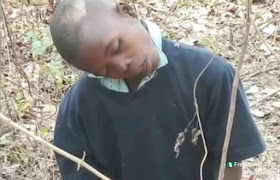 It was a tragic sight on Tuesday in the premises of Muslim Comprehensive High School (MCHS), Oko, Ogbomoso, Oyo state, as the body of a JSS two student was found dangling from a tree, stone dead.

The 13-year old boy, whose name is given as Abolarinwa Opeyemi, believably committed the suicide a day earlier, while still in his school uniform.

According to findings by newsmen, nobody knew what led to the suicide as he did not leave any note.

However, it was disclosed that he had little misunderstanding with his mother at home which led to his mother threatening to deal with him after returning from school.

It was learnt that he had attempted to stealthily scoop some cashew nuts spread in the family compound to dry to go and sell for his own gain but was discovered and was angrily chastised by the mother.

“We heard that the mother threatened him seriously that after he returned from school he would still be dealt with. We don’t know if it was to escape punishment that he hanged himself,” a teacher of the school told newsmen on condition of anonymity.
Further enquiries revealed that the boy did not mark the attendance as being in school that day.

”His name was not marked present in his class register that day but his friends saw him and he reportedly told them that he just came to get something done in the school that day but would not enter class or mark attendance,” the teacher added.

When his parents did not see him at home they looked for him all around; they searched him in the classrooms but was not found. The parents now thought he had gone to sleep at a friend’s place to avoid being subjected to punishment.
When he was not seen again on Tuesday morning, they reported him missing. A radio announcement was also made about him being missing.

Further search in the morning eventually led to his body being discovered with a rope hung from a short tree behind a block of classrooms in the school.

Meanwhile, it was asserted that his mother was a very harsh woman with a notorious habit of heaping abuses and curses on her children, and so some people believed it was the fear of her mother that drove the boy to take his life. “But what does a boy of thirteen know about suicide?” a worried commentator posited.

The incident which threw the whole community into mourning was confirmed by a source at Oko Police station and is already being investigated.