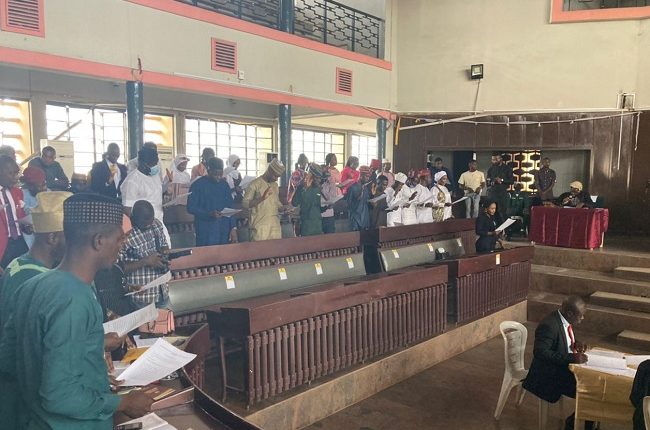 A graduate of the Ladoke Akintola University of Technology (LAUTECH) Ogbomoso, Israel Fawole has been elected Speaker of the 32-member Oyo State Youth Parliament.

At the election held at the House of Chiefs, Secretariat, Ibadan, Temilade Oladiti of Lagelu state constituency was elected deputy Speaker.

Oladiti, a graduate of the University of Ibadan polled the highest votes to defeat Ogundiran Abel, a member representing Oorelope state constituency.

Supervised by Clerk of the youth parliament, Mr Isiaka Adetunji, the duo of Fawole and Oladiti subsequently swore to an oath of office.

The entire members of the second Assembly of the Oyo State Youth Parliament subsequently swore to an oath of allegiance and were inaugurated.

Fakorede also urged them to see their emergence as youth lawmakers as a call to service.

This is as he urged them to be consistent with their character.

Others including the Special Assistant to Governor Seyi Makinde on Youth and Sports, Mr Kazeem Bolarinwa urged the youth lawmakers to see their emergence as an opportunity to learn, unlearn and launch into politics.

While preaching oneness and collaboration, Bolarinwa also urged members of the youth parliament to be keen to add value to themselves.

Special Assistant to the Oyo governor on Student Affairs, Mr Victor Olojede tasked the youth lawmakers to be involved in grassroots development in their various constituencies.

Olojede further urged them to be keen on the overall development of the youth of Oyo State.

Chairman, Oyo House of Assembly Committee on Youths, Honourable Fola Oyekunle tasked the youth parliament to be ready to learn from the main state parliament while assuring support of the State Assembly.