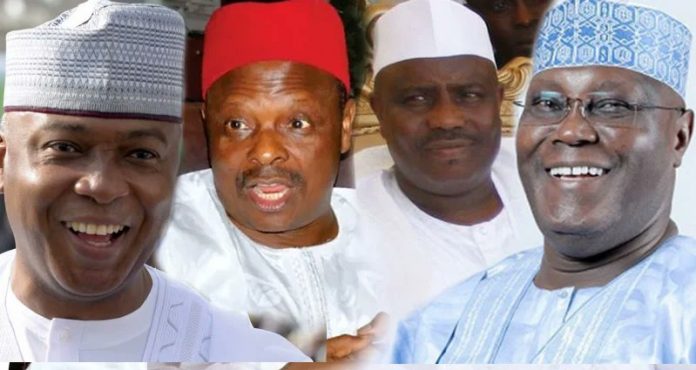 There may be a beam of hope for popular politicians from the northern part of Nigeria who have shown interest to run for president in 2023 on the platform of the Peoples Democratic Party as the party says it may drop its zoning culture and throw the presidential primary open to all eligible members from all over the country.

PDP Deputy National Publicity Secretary, Abdullahi Ibrahim, on Friday, unequivocally said the leadership of the party was considering scrapping the idea of zoning for the 2023 Presidency.

Ibrahim, who spoke in an interview with Arise News monitored by The PUNCH, also said the PDP won’t wait for the All Progressives Congress before taking a decision on zoning or otherwise for the 2023 Presidency.

Northern PDP chieftains who have shown interest in getting the party’s 2023 presidential ticket include former Vice President Atiku Abubakar; former Senate President, Bukola Saraki; Sokoto State Governor, Aminu Tambuwal; Bauchi State Governor, Bala Mohammed; and ex-governor of Kano State, Rabiu Kwankwaso. While some of them had yet to officially declare their presidential bid, there are strong indications they are eyeing the exalted seat in Aso Villa.

With just about one year to the 2023 presidential election and a few months to the party primaries, there has been intense pressure from the southern region of the country for power shift to the region from the north.

The 17 southern governors and socio-political groups including Afenifere, Ohanaeze Ndigbo, Pan Niger Delta Forum and the Middle Belt Forum had constantly insisted that power moved to the south in 2023 after the eight-year regime of the President, Major General Muhammadu Buhari (retd.), who is from Katsina State.

The groups had declared that political parties that field northern presidential candidates won’t enjoy their support in the 2023 general elections.

Since Nigeria’s return to democracy in 1999 after the dark years of military despotism, power had swung between the North and the South.

Upon his passing, he was succeeded by his deputy, Goodluck Jonathan, according to the constitution of the Federal Republic of Nigeria. The PDP chieftain and former governor of Bayelsa State from Southern Nigeria contested the 2011 presidential election and returned to office.

Jonathan was, however, kicked out in May 2015 when he lost his reelection bid to Katsina-born Buhari of the All Progressives Congress who has since been in power and would complete an eight-year term by May 2023.

So far, southerners have been in office for a total number of 13 years while northerners would have spent 11 years in Aso Rock when Buhari completes his second term in May 2023.

Many politicians of northern extraction had argued for the need to balance the number of years that both the north and south stayed in power while southern political godfathers and strongmen have vigorously continued to displace the argument, insisting that the presidency should move to the south in 2023 after Buhari’s double term. The arguments had at various times led to strong verbal altercations and exchange of expletives between southern politicians and northern bigwigs.

Speaking on the television programme on Friday, the PDP Deputy National Publicity Secretary (Ibrahim) said the PDP is treading softly to ensure all interests are accommodated before the party comes up with a decision on its zoning culture.

Ibrahim said, “The haste with which people are just expecting us to declare zoning now, there are processes of consultations and engagements which is ongoing. We just have in place a National Working Committee which is barely two months in office. What it is doing now is to aggregate all the contending forces and interests and all the divergent views of Nigerians and come up with an informed decision as to where the Presidency will be zoned accordingly.”

According to the PDP chieftain, zoning is to strengthen unity and mutual cohesion because Nigeria is heterogenous in nature hence the need to allocate responsibilities accordingly.

He said, “It is only PDP that has realised the need to zone these offices and rotate them accordingly so that every interest, every region and every contending force within the country will feel among.”

Asked whether the PDP is thinking of jettisoning the idea of zoning, Ibrahim said, “It is on the table and it is a factor that is taken very seriously. We’re beginning to look at all of these interests and all of these clamour to see how we will make an informed decision at the fullness of time. It is not something we will want to do unilaterally, we will take national interest and divergent views of Nigerians in coming up with decisions. That is why we are not rushing things.”

On why the National Executive Council of the PDP has not taken a decision on the Governor Bala Mohammed report that the presidential ticket be left open to all interested aspirants, the PDP deputy national publicity secretary said consultation is ongoing.

Aside from northern politicians, some southern stalwarts of the PDP including former Senate President and Secretary to the Government of the Federation, Pius Anyim; former Ekiti State Governor, Ayodele Fayose; ex-governor of Anambra State, Peter Obi; media personality, Dele Momodu, amongst others have also expressed interest in clinching the party’s 2023 presidential ticket in the primary which is expected to hold later this year.

Other presidential hopefuls so far outside of the PDP include APC leader, Bola Tinubu; Governor of Ebonyi State, Dave Umahi; ex-Governor of Imo State, Rochas Okorocha; former Governor of Abia State and Majority Whip of the Senate, Senator Orji Kalu; former Deputy Governor of the Central Bank of Nigeria, Kingsley Moghalu, among others. Vice-President Yemi Osinbajo has also been rumoured to nurse an ambition to succeed his boss through the 2023 election but the professor of law has not officially made his intention known.

While politicians are engrossed in the zoning debate, the concerns of millions of Nigerians are about the emergence of a President who would stabilise the economy, force down inflation through sagacious fiscal policies, provide conducive operating environment for businesses to thrive, boost food production, secure lives and property, provide good infrastructure, quality education and affordable healthcare services.

APC Rakes In N2.63bn From Presidential Forms, Over 5bn From Governorship...