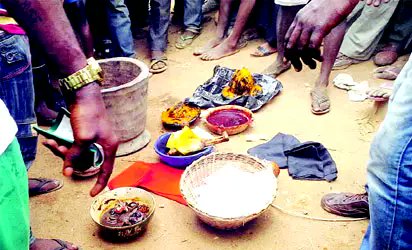 Prof. Olanrewaju Fagbohun, the Immediate past Vice Chancellor of the Lagos State University, says the flamboyant lifestyle of religious leaders is encouraging the rush for ill-gotten wealth through money rituals.

Fagbohun stated this while delivering a lecture, titled “The Laws of God and the Laws of Man at the Intersection of Justice”, at the thanksgiving and reception programme for Mr Adeleke Agbola who got elevated to the rank of a Senior Advocate of Nigeria (SAN).

The News Agency of Nigeria (NAN) reports that the programme was organised on Saturday by the people of Ere-Ijesa Town, Oriade Local Government Area of Osun, to recognise and appreciate Adeleke Agbola (who hails from the town).

The professor explained that religious leaders in the country have become complaisant and conspirators in the corrupt activities of members of their congregation.

He said a lot of people are living what he called “split personality”, meaning they are living and presenting one personality to their religious leaders and living another personality outside religion.

He said religious leaders know the truth and the rot going on in the society but choose to turn a blind eye because of what they tend to gain or what comes to them from the proceeds of corruption.

He said religious leaders, as custodians of ethics and moralities, have dropped the ball and are now dinning and giving coverage to people with questionable characters.

He said in situations where religious leaders are driving in motorcade, owning private jets and wearing expensive cloths and living flamboyant lifestyle, it encourages get rich quick mentality, which is part of the reason for increasing money ritual killings.

He said if the law of God (ethics and morality) is applied and enforced in the implementation of the law of man, we will have a better society.

Earlier, while delivering the thanksgiving sermon, at St. Stephen’s Anglican Church, Ere-Ijesa, Rev. Isaac Oluyamo, pointed out that God knows everybody and the things we do, admonishing all to ‘be careful’.

Oluyamo, however, called on sons and daughters of Ere-Ijesa Town, living in other states and towns, to invest and develop their home town, asking them to emulate Adeleke Agbola who has a foundation, through which he has been giving back to his people.

He further appreciated those already empowering the youths of the town and asked for people to be committed to the works of God, just as some are already doing.

The celebrator, Adeleke Agbola, thanked God and the people of Ere-Ijesa for honouring him, asking other sons and daughters of the town not to forget their humble background and give back to their community without having any fear that village people will come after them. (NAN)