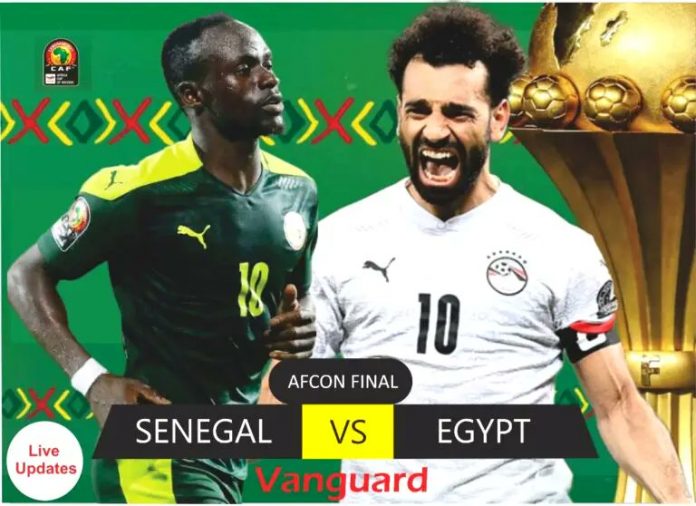 END OF EXTRA TIME: After 120 minutes it remains goalless. The new king of African football will be decided via penalties

114′ Salah has had two runs checked by the Senegalese defence who seem to have the solution to any threat he may pose.

107′ Saliou Ciss concedes a free kick just outside the box. The resulting free kicks fails to pose any threat and Senegal clears their lines.

SECOND HALF OF EXTRA TIME BEGINS

HALF TIME OF EXTRA TIME

EXTRA TIME FIRST HALF: 92′ Sadio Mane puts Boulaye Dia through but his effort is saved by Abou Gabal. The Zamalek shot stopper is having an unforgettable night.

END OF SECOND HALF: Both sides yet to score as the second half comes to an end. This will be Egypt’s fourth game of this AFCON that will go all the way. Every game from the Round of 16 has lasted for 120 minutes for Carlos Queiroz’s side.

88′ Mane goes into referee’s book for a foul

72′ Mane escpaes getting booked after a foul on Ashour

45′ The referee brings the first half to an end

42′ Salah forces a save from Mendy and wins a corner for Egypt which Mendy collects.

32′ Egypt has been the second best team so far, recording just one shot on target frim Mohamed Salah

28′ Salah teases his way through the Senegalese defence but his low effort is easily saved by Edouard Mendy who has been more of a spectator.

24′ A long pass to Marmoush from Abdelmonem but the foward fails to meet it.

23′ Another great play from Ismail Sarr who crosses into the box but Mane is unable to reach it.

11′ A tame effort by Ismail Sarr makes an easy save for Abou Gabal. Senegal asking all the questions so far

9′ Free kick to Senegal after a foul on Ismail Sarr.

6′ Mane misses from the spot. Great save by Abou Gabal who dived in the right direction to beat Mane’s fierce strike away. Huge let off for Egypt

5′ Abdelmonem receives a yellow card for the foul on Ciss.

2′ good defending from Egypt to prevent Mane from driving into the box.

Senegal kick-off the first half

National anthems done and we are about to get under way