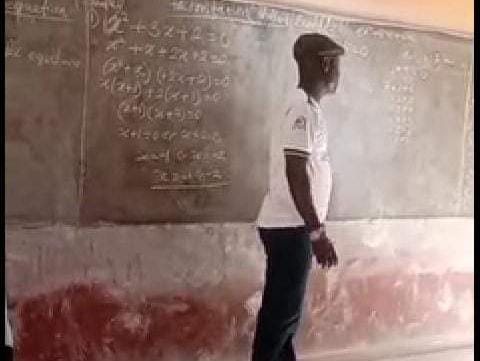 A traditional ruler, Onisanbo of Ogbooro land in Saki East Local Government Area of Oyo State, His Royal Highness, Oba Kazeem Adio Adegboye (Ilufemiloye 1), has received a commendation from the people of the town for volunteering to a particular school in the town.

Oba Adegboye, according to report, shares his knowledge of mathematics with some students of school.

Recall that recently, the picture of the traditional ruler surfaced on social media, particularly Facebook in which he was seen taking the students of Community Grammar School, Ogbooro, on rudiments of mathematics.

Some indigenes of the town who spoke with Saturday Tribune described his action as a very good one, stating that it is quite commendable.

Segun Ibilade, an indigene of the town, said: “As support to his community, Kabiyesi went to the classroom with his knowledge of mathematics as a trained engineer to teach students for free. Leadership is indeed responsibility and influence, not just carrying the title. We thank and commend him for this initiative.”

Speaking on what prompted his decision to embark on such a move, Oba Adegboye, said: “Impacting knowledge on others particularly the young ones who are leaders of tomorrow prompted my decision.

“I want to use this opportunity to state categorically that I am willing to contribute more quota towards the development of my immediate community. I will not allow my position as a traditional ruler dissuade me from embarking on developmental activities.”

His emergenc as an Oba was ratified by Governor Seyi Makinde in a letter by the state government dated 22nd of July, 2020.