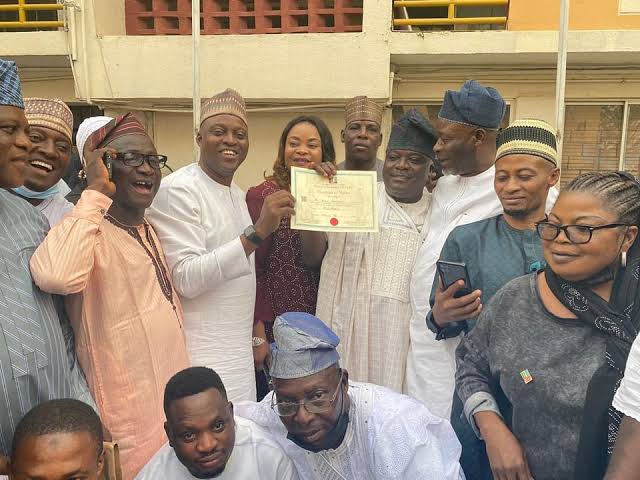 Following the Inauguration of Isaac Omodewu as the elected Oyo state party chairman of the All Progressives Congress, APC, there are indications that more trouble may be brewing as critical stakeholders in the state’s opposition party have rejected the return of Mr Omodewu as State Chairman of the party.

It will be recalled that controversies have continued to trail the outcome of the Oyo state APC congress which was validated by the party’s national Secretariat in Abuja during the weekend when Isaac Omodewu believed to be loyalist of Senator Teslim Folarin was Inaugurated alongside others as various state chairmen of the APC.

The stakeholders who rose from a meeting in Ibadan on Sunday February 6 (today) noted that there was no congress on which Omodewu could be returned as State Chairman, wondering the basis on which the National Secretariat could have issued Omodewu with a Certificate of Return.

The stakeholders consisting of the bigwigs in the opposition party vowed to use every legal means to return the party to majority of its members who overwhelmingly returned Alhaji Abubakar Adejare Gbadamosi as State Chairman of the party.

According to a press statement signed by Senator Adebayo Adeseun which was obtained by this online news medium, other listed subscribers to the press statement include Minister for Youths and Sports, Sunday Dare, former Minister for Communications, Adebayo Shittu, Senator Fatai Buhari representing Oyo North Senatorial Zone, Adebayo Adelabu (gubernatorial candidate of the party in the 2019 election), Fatai Ibikunle (Chairman of the Nigeria Lotteries Regulatory Commission), and Professor Adeolu Akande (Chairman of the Nigerian Communications Commission).

Others are Dr Ismail Adewusi (Post Master General of the Federation), Zachh Adelabu Adedeji (Executive Secretary of the Nigerian Sugar Development Council), Joseph Tegbe, Dr Azeez Adedutan, former (Commissioner of Health). They stated that the inauguration of Omodewu is a threat to the APC in Oyo State as the enthronement of a minority group on a majority cannot stand. “It will only lead the party to electoral disaster in Oyo State”, they said.

He apologized to the stakeholders for the error and the meeting resolved to complete the Consensus election of a State Chairman which had produced Alhaji Gbadamosi as State Chairman.

“The purported return of Omodewu is the climax of a reign of impunity which a tiny and minority section of the party in Oyo State in collaboration with outside forces had sought to impose on the party ahead of the 2023 general elections. As such illegalities have always been, it will definitely fail.

“The stakeholders resolved to use every legal means to reclaim the mandate given to Alhaji Abu Gbadamosi and establish a party leadership that represents the wish of majority members of the party in Oyo State.“What we are witnessing is a temporary distraction that would test our commitment to democratic principles and the rule of law. We will not fail the test.

“There are attempts to exploit sentiment to rally support for the illegitimate Omodewu executive. We commend our members who have spurned the early morning visits and calls to woo and hoodwink them to support the illegitimate executive. The clandestine visit, calls and blackmail will continue.

“We are convinced that our history of commitment to democratic principles which have always been on display in Oyo State will make all such nefarious efforts come to naught. “We implore all members of the party in the state to remain calm and law abiding. Every legal means would be employed to return the party to the overwhelming majority of members who have expressed their preferred leadership through the democratic process enshrined in the Constitution of the party.” The statement said.