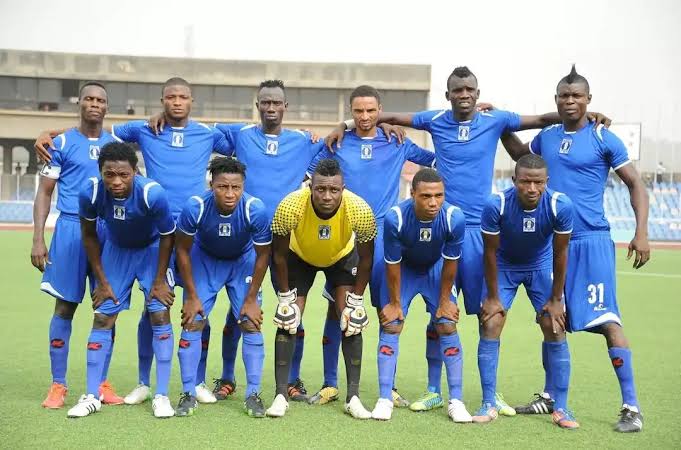 It was not just a day meant for the Ibadan soccer lords, as they produced a sparkling performance against the homers, to the satisfaction of their traveling supporters.

In the encounter, which was characterized by questionable officiating, Remo Stars’ skipper, Julius Nduka’s stunning free kick, close to the 18 yard box, was all that separated the two sides in the very exciting match.

Backed by their vociferous fans, who literally turned the Remo Stars Stadium to the abode of the Oluyole Warriors, having travelled in their hundreds to cheer up their team, the coach Edith Agoye tutored lads took the game to their host right from the start of the encounter.

Coach Agoye and his lieutenants, kept faith in goalkeeper Olaide Okanlawon, the quartet of skipper Abbey Benson, Ezeala Uche, Amodu Nurudeen and Ghali in the defence, Ndedi Henry,, Akilu Mohammed, Damilare Olatunji in the middle as well as Ayo Adejubu, who was a thorn in the flesh of the homers, Ebenezer Odeyemi and Kolawole Daniel, upfront.

The coach Gbenga Ogunbote tutored Remo Stars, had a ddificult time curtailing the visitors who could have gone ahead in the first half but were unlucky as Adejubu, having outpaced his marker, dribbled past goalkeeper Kayode Bankole, saw his effort cleared on the line.

The Oluyole Warriors did not relent at the resumption of the second half but they cod not find the back of the net as Stanley Okorom, Seun Ogunbiade, skipper Junior Nduka as well as gialkeeper Bankole thwarted all their moves.

Dangerman, Adejubu who received so many knocks in the first half, could not continue due to injury and had to be replaced by Seyi Okeowo at the start of the second half.

Despite the attempts by the visitors, it was the host who broke the deadlock, ourtesy of a superb free kick by skipper Julius Nduka, which turned out to be the only goal of the match.

In the search for the equalizer, the 3SC bench replaced Kolawole Daniel and Damilare Olatunji with Malomo Taofeeq and Nafiu Raheem and later Ebenezer Odeyemi with Gafar Olafimihan but the Sky Blue Stars, stoutly defended their slim lead.

Shooting Stars came close to scoring twice towards the end of the match but Akilu Mohammed’s well taken free kick, missed the target by inches while Ezeala’s Uche’s effort, off another free kick, hit the upright, with goalkeeper Bankole already beaten.

The Ibadan soccer lords, will next play host to Dakkada FC, in a matchday twelve fixtures at the Lekan Salami Stadium.

Meanwhile, ugly incidents occurred at the end of the game when some traveling supporters and fans of the Oluyole Warriors were attacked by Remo Stars’ fans, leaving some people injured and vehicles slightly damaged.