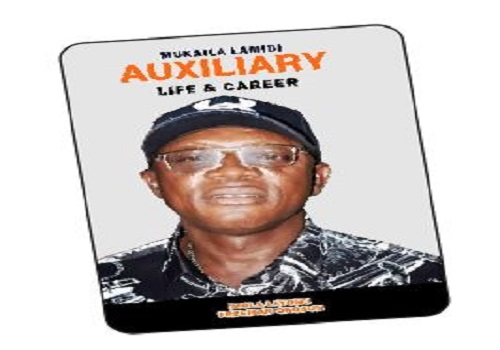 Mukaila Lamidi Auxiliary: Life & Career is a literary biographical book, creatively telling stories of a rascally boy, who wobbled through the undulating paths and snaky roads of existence to become a man of heroism. Written by Biola Layonu and Freeman Okosun, two cooperative partners in the practice of biographical documentations, this book is very unique, captivating and desirable. It treats issues of political history, socio-political struggles, childhood plays and pranks, street life, friendship fun and traditional polygamous setting where rivalry, pettiness and jealousy often rear their heads.

Interestingly, the authors take a reader from floating in one stream of exciting story to another, and then to another, making the reader enjoy tributaries of stories flowing into the sea of pleasurable reading. Biola Layonu and Freeman Okosun succeeded immensely, in telling stories about Mukaila Lamidi, whose father, a Civil Servant, had wished that he (Mukaila) went to school and eventually become a Civil Servant as well. But alas! A father’s idea of travel by air was quite different from the son’s idea of travel by road.

Indeed, seeing a book on Mukaila Lamidi, alias Auxiliary, one’s mind would be congested of various ideas. Here is a rugged and dogged man who holds the society with a firm grip, because, he believes that the society holds him with iron hands. The good thing is that the authors have told stories that the society cannot ignore, but to read in order to know the true person of Mukaila Lamidi and his hustles and bustles to be able reach the arena of leadership. From a nobody, he bulldozed his way to become somebody, who now dines and wines with the high and mighty.

In Chapter One of the book, the reader is introduced to Pa Lamidi’s polygamous home into which Mukaila was born. Pa Lamidi, believing that Mukaila should be a Civil Servant like himself, made arrangements for his enrolment at the N5 Elementary School. Indeed, Pa Lamidi believed so much in Mukaila as a true son with the air of fearlessness around him. On page three of the book, the authors noted: “A child whom he (Pa Lamidi) was certain would grow up brave and bold enough to confront life’s complexities was well as its whims and fancies.”

Mukaila’s start of elementary school is captured in Chapter Two. Here, the authors gave an account of General Yakubu Gowon’s visit to Ibadan, how Mukaila and a number of pupils were lucky to shake Gowon’s hand, and how Mukaila developed hatred for school environment as a result of being flogged by Teacher Ajala.

The incidents in Chapter Three are quite attention-grabbing. Against Pa Lamidi’s strong wish, Mukaila refused to taste the juicy apple of secondary school education. Despite his good First School Leaving result, and Fatimah College, Ikire, waiting to welcome him, the boy Mukaila, who already had hatred for school environment, turned his back. Instead, at the age of 12, he drank the strong wine of street life to define his own kind of freedom existence, and not a regimented life of civil service. Hear the authors on page 60: “He didn’t want the clean, coordinated, almost sweat-less way of life that Civil Service produced. It looked too dull and uninteresting for the kind of blood that boiled through his veins.”

Since he turned against his father’s wish, Mukaila disappeared from home and took to car-washing at Mokola, which was then the major motor park in Ibadan. In those days, Gbadegesin, a fearless and most feared motor pack tout ruled Mokola. It happened that while Mukaila was washing a car one day to make ends meet, Gbadegesin who desperately needed money, approached Mukaila to collect the day’s tax. Mukaila told Gbadegesin to give him some time to finish washing the car, but Gbadegesin will not take that. So, he pushed Mukaila by his shoulder and kicked his bucket of water.

In annoyance, Mukaila pushed him as well, and that highly annoyed Gbadegesin, the lord of Mokola Motor Park. A fight began, it was a great fight. The two rascals fought until both of them were exhausted before they were separated. Gbadegesin, in the full glare of the world, looked dazed. Nobody at the Mokola Park had dared him. But Mukaila, that small boy had the gut and bravely bruised his ego, rudely roughened his mien, badly battered his personality and brought his great motor park authority to disrepute. Gbadegesin was truly dazed.

After that great fight, Gbadegesin was afraid that Mukaila might one day overthrow him at the park. So, Gbadegesin worked on his loyalists and they began to rebel against Mukaila. On page 71, Layonu and Okosun wrote: “He (Gbadegesin) began to devise several mischievous means to put Mukaila in trouble, and to present him like a villain in the eyes of everyone, because he had reckoned that with Mukaila around, he was bound to lose his place of honour before long. This mischievous sabotage by Gbadegesin began to make the streets unbearable for Mukaila.

For what seemed like a dark moment, Mukaila left Ibadan for Lagos to begin a new life of making ends meet. This new life of Mukaila was painted on the canvas of Chapter Four. While in Lagos, he worked as a bus conductor, saved money and eventually gained admission into a driving school to earn his driving certificate. Along the line, the death of his father, Pa Lamidi, which Mukaila read in a letter sent to him, hit him so hard and got him devastated. “Mukaila had not cried in years,” the authors wrote on page 98/99, “he was a man of the streets, and one thing every person from the street would always learn, was hardiness, to be unfeeling. But as Mukaila held the letter, he could not withhold the urge to cry. It was the only way he could loosen the grip that was tightened round his neck like a noose. He covered his hands round his face and wept.

In Chapter Five, the authors described episodes of Mukaila’s return to Ibadan, and how he joined the National Union of Road Transport Workers (NURTW). In the NURTW, Auxiliary became an active politician and a unionist who gradually, rose to the position of Vice-Chairman in Oyo State. While in Chapter Six, Auxiliary was linked to a sensational murder case. Said to be a victim of political persecution, he was detained in prison and eventually, was discharge and acquitted. Later, Governor Seyi Makinde of Oyo State elevated Auxiliary to take charge of disciplinary matters concerning motor park management in Oyo state.

Noted as an ardent lover of a large polygamous family in Chapter Seven, eulogized as a devout Muslim who built a mosque in memory of his Muslim father, and also built a church in honour of his Christian mother in Chapter Eight, and described as a socialite and hotelier in Chapter Nine, Auxiliary’s biography is concluded in Chapter Ten, with comments by his relatives, friends and associates. Amongst these people, Johnson Abiola Jaiyeoba commented on Auxiliary. “He is stubborn but very hardworking,” Abiola said, “he is also steadfast and resilient. I believe those qualities made him to rise in his chosen career,” Abiola added.

In fact, this biographical book is a laudable feat of creative versatility and distinction. It is a bold literary piece that serves as a veritable window through which readers can see the clear image of Mukaila Lamidi, a man whose dog is given a bad name, but the society cannot hang it, a man whose person some people unfortunately, misunderstood and misinterpreted, but refused to be bullied, a man whose waist is far above water level, and so, opposite forces cannot drown him.

The authors – Biola Layonu and Freeman Okosun thrived with a smooth-flowing prose, their collective voice is bold, and heir narrative pattern is highly commendable. They are advised to take care of the typographic errors in the book when the next edition is to be produced.

In conclusion, this book is a biography of important revelations. It is a revelation of motor park society in which the leader enjoys robust financial benefits, and he is highly respected by his followers, but he must always keep on his toes not to be bullied out of his position by way of force. It is a revelation of what our people will describe as ‘bad belle’ politics where the winning party victimizes perceived opponents. This biography is also a revelation of what people can get through the highly-placed people they know. Above all, it is a revelation of Mukaila Lamidi alias Auxiliary as a fearless Ibadan indigene, a onetime car washer, bus conductor, driver, unionist, politician, socialite, hotelier and a family man paddling in the boat of polygamy like his father of blessed memory.

Ebika Anthony is a poet, puppeteer, performer and publisher based in Ibadan.

How Water-Vendor Was Beaten To Death, Burnt After Alleged Blasphemy