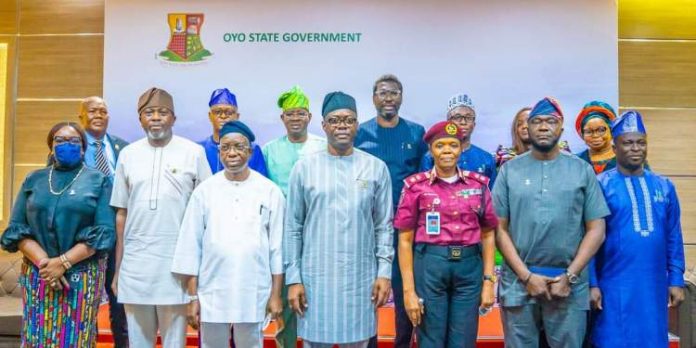 The governor, while inaugurating the 10-man Council, at the Executive Chamber of the Governor’s Office, promised to replicate the same in all local government areas of the state.

A statement by the Chief Press Secretary to the governor, Mr. Taiwo Adisa, quoted the governor as stating that the council will be saddled with the responsibility of educating drivers, motorists and other members of the public on the proper use of the roads and highways.

According to him, apart from the fact that his government had been building road infrastructure that targets the economy and connects the zones of the state, “we want people to experience pleasure driving on our roads.”

He said: “It could not have been a better time to inaugurate the Oyo State Road Safety Advisory Council because our roads are getting better, and the rate at which people are crashing their vehicles is also getting higher.

“In fact, the reason why we are building world-class roads is that we want people to enjoy driving on those roads. Apart from the roads targeting our economy and connecting our zones, we want people to experience pleasure driving on our roads. “But what you see is that when we fix the road, people start speeding anyhow and that is why we now have to put speed bumps, which again will make driving unpleasurable.

“As a matter of fact, two nights ago, around 1 a.m. when I was going from the Secretariat towards U.I, before you get to Customs, there was a fatal crash. I met them there and this happened four minutes before I got there. The lady involved died instantly and that is just here. Now, you can imagine what is happening on Moniya/Iseyin road.

“Last night, I went to inspect the road from Odo-Ona to Apata and we saw someone drive on the other side, who must have been moving at over 140km/hr. I told the people with me to imagine someone driving at that speed within the town. So, we can imagine what is going on outside the city.

“We have real challenges to deal with. Apart from educating the drivers, I asked them to investigate the crash here because I felt they were coming from the club. So, we have to also let both drivers and passengers know that, ‘look, if somebody is already drunk, there is no need for them to risk their lives’; and I know that the advisory council is supposed to be replicated at the local government.

“We want to cover as much of our space and as quick as possible.”
Governor Makinde, who pointed out that Oyo State continues to be a pacesetter in all fronts, assured members of the council of his administration’s readiness to support it to achieve success in the task ahead.

“I believe you have quite a bit ahead of you. I am also proud to say that, for us in Oyo State, we are not afraid to be trailblazers. “The Federal Road Safety Corps started from here in Oyo State and they saw it as something desirable at the federal level and it was adopted. And there are few of our programmes and policies that have been adopted by the Federal Government.

“We just do not want this council to be on paper and I give you the assurance that whatever support you need, our administration will give that support to you.

“On that note, I hereby pronounce the Oyo State Road Safety Advisory Council inaugurated,” the governor said.
He urged the members of the Council to put in their best.

Other members are Commissioner for Education, Science and Technology, Mr. AbdulRahman AbdulRaheem; Commissioner for Environment and Mineral Resources, Mr. Abiodun Oni; representative of the Nigerian Society of Engineers, Mr. Victor Ogunranti and the Oyo State Sector Commander of the FRSC, Chukwurah Uche.