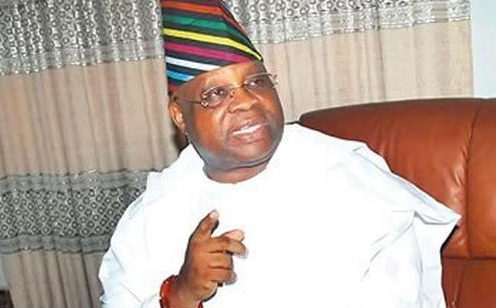 Sen. Ademola Adeleke, one of the Peoples Democratic Party (PDP) governorship aspirants in Osun, says he didn’t walk out of peace and reconciliation meeting on Monday in Okuku.

The meeting was hosted by a former Governor in the state, Prince Olagunsoye Oyinlola.

Adele made the clarification following allegations that he stormed out of the peace meeting when he was feeling uncomfortable with the direction of the meeting.

The News Agency of Nigeria (NAN) recalls that the national leadership of the party recently constituted a committee to resolve all issues ahead of the July 16 governorship election in Osun.

Adeleke said that he only left the meeting to attend to an urgent family matter.

In a statement by his Campaign Organisation, the aspirant said that he accepted the resolutions made at the meeting.

According to him, the meeting is fruitful with commendable resolutions and conclusions.

“I commend our leaders for the successful outcomes of the meeting. I associate myself with the resolutions reached.

“PDP is now one big united family in Osun State. I accepted the resolutions reached, though I left afterwards to attend to urgent family matters.

“We urge PDP members to sustain the peace efforts and avoid spreading rumours that may derail the successful conclusion of the ongoing reconciliation moves,” Adeleke said.

NAN reports that INEC had fixed July 16 for the governorship election in the state.