OAU Mourns As Undergraduate Dies Hours After Falling Into Soakaway 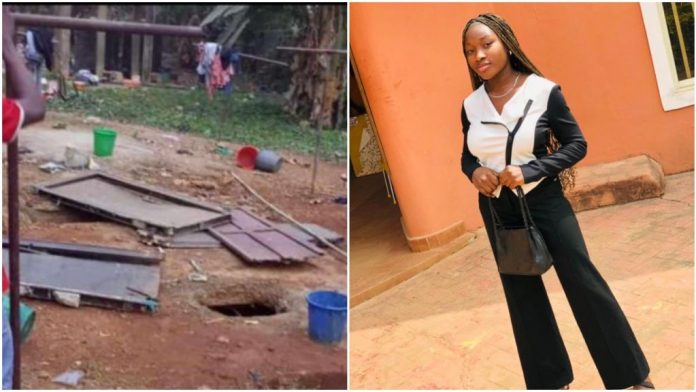 Heritage Ajibola, a student of the Department of Linguistics and African Languages, Obafemi Awolowo University (OAU), Ile-Ife, Osun State, has died after she accidentally fell into a soakaway her hostel of residence.

Eyewitnesses, who were at the scene of the incident, revealed that she was with her friends spreading clothes on a line when she mistakenly fell into a hole leading into the soakaway and got stuck in it.

They stated that before her friends could rush to call for help, she had already fallen deep into the soakaway.

According to the eyewitnesses, “It took almost an hour before help came and even with the presence maintenance team and the Osun State Fire Service, it took up to half an hour before they could get her out of the soakaway.”

They also disclosed that it was later discovered that the cause of the collapse was that termites had eaten the wood which was used to cover the soakaway.

The management of the university has also confirmed the incident.

A statement sent to DAILY POST, the university Public Relations Officer, Abiodun Olarewaju, stated that the student Ajibola Heritage Ayomikun, was a resident of BVER hostel, one of the privately rum hostels in the Students Village.

The OAU spokesperson, who explained that the university management was saddened by the unfortunate incident, added that when the news got to management, it immediately mobilised the firemen from the university, Osun State and the OAU Teaching Hospital who through concerted efforts got the student out.

Olarewaju stated that immediately she was brought out from the hole, she was rushed to the OAU Teaching Hospitals Complex where she was certified dead.

He stated that the university Vice-Chancellor, Prof. Eyitope Ogunbodede, who led the rescue team to the scene, while appealing to the students to remain calm and law-abiding, added that the police had been briefed about the incident and they have commenced investigations.

Describing the incident as tragic and unacceptable, Ogunbodede also promised to critically look into the circumstances that led to the student’s death and mete out appropriate sanctions against those involved or whoever is found culpable.

“The Vice-Chancellor, therefore, appealed to the students to remain calm and law abiding as the police, who have been briefed, are also investigating.”

Reacting to the incident, the OAU student union leadership described the death of Heritage as an unfortunate and avoidable death.

In a statement jointly signed by Olayiwola Folahan Festus, President-elect, Odewale Samuel Damilare,
Secretary General-elect and Ogunperi Taofeek Olalekan (Tao),
Public Relations Officer-elect, the student stated that the deceased would have survived if the soakaway system was properly constructed and covered.

They alleged that despite the huge amounts of money paid by students for rent, students life was still not safe within he school environment.

The union, while demanding immediate justice for the deceased, maintained that doing so would forestall possible reoccurrence.

The death of Ajibola Heritage Ayomikun is coming three months after the death of Aishat Omowumi Adesina, a part four students of the Department of Foreign Languages.

Recall that the death of Aishat had earlier sparked a protest as the students accused the OAU management of negligence.