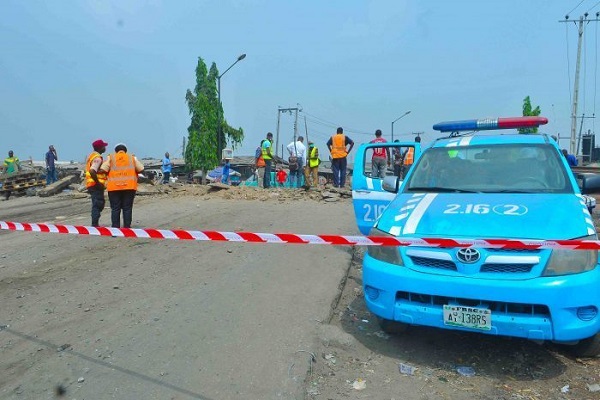 An early morning multiple accidents today, on the Ogun State axis of Lagos/Ibadan Expressway has claimed the lives of three people and injured one other person.

The incident occurred inbound Lagos at DANCO area at about 5.25 am.

The fatalities were three males, while one male was injured during the accident.

This was confirmed by the spokesperson, Ogun State Traffic Compliance and Enforcement Corps TRACE, Babatunde Akinbiyi.

According to eyewitnesses account, the MAN Diesel truck driver lost control and overturned, with two other vehicles ramming into it from the rear.

Vanguard report that despite the timing, men of TRACE, Federal Road Safety Corps, FRSC, the Nigeria Police, and a construction company, Julius Berger were involved in the rescue operation.

The bodies were recovered and deposited at Idera Hospital, while the injured victim had been rescued before the arrival of the rescue team.

Also, the accident trucks were towed to the nearest Police station for further investigations.

While TRACE Corps commiserated with the affected families, Akinbiyi admonished motorists, particularly articulated vehicle drivers, to avoid speeding and ensure their vehicles are properly latched, in view of its attendant consequences.