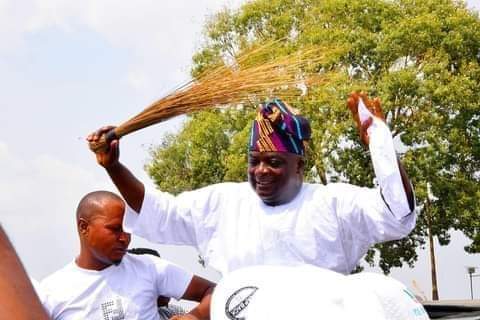 The crisis in the All Progressives Congress (APC), Oyo State took a turn for the worse on Wednesday as major stakeholders unanimously rejected Isaac Omodewu as state chairman of the party.

Arising from a joint meeting on Wednesday, leaders of the two major zones in the state, Ibadan Main City and Ibadan Outer City, made up of 11 out of the 33 local government areas in the state, condemned the inauguration of Isaac Omodewu as the state chairman, adding that the congress that produced him was flawed and had earlier been rejected by the national caretaker committee of the party.

The leaders of the two zones also known as the Progressives Foundation Forum, which has the largest voting population in the state, said it aligned with the other five zonal leaders which had come up with a harmonised list.

They said in the harmonised list which was submitted to the national secretariat of the party, Alhaji Abubakar Adejare Gbadamosi was chairman while other positions had also been agreed upon on zonal basis during one of the several harmonisation meetings of the zonal leaders and stakeholders in the party.

The two zones with a voting strength of about 57 per cent are the most populous zones in the state.

Earlier in the week, other major stakeholders of the party had condemned the inauguration of Omodewu.

The stakeholders said there was no congress which returned Omodewu as state chairman, wondering the basis on which the national secretariat could have issued Omodewu with a “Certificate of Return”.

“The details of what transpired on the purported state congress of the party in Oyo State is an open book. At the stakeholders’ meeting held at the national secretariat on November 4, 2021, the national secretary declared that the purported congress conducted on October 30 at the Liberty Stadium, Ibadan “was held in error” and without the knowledge or approval of the national chairman of the party. He apologised to members for the error and the meeting resolved to complete the consensus election of a state chairman which had produced Alhaji Gbadamosi.

“The purported return of Omodewu is the climax of a reign of impunity which a tiny and minority section of the party in Oyo State, in collaboration with outside forces had sought to impose on the party ahead of the 2023 general election. As such illegalities have always been, it will definitely fail.

“The stakeholders resolved to use every legal means to reclaim the mandate given to Alhaji Abu Gbadamosi-led state executive and establish a party leadership that represents the wish of majority members of the party in Oyo State.

“What we are witnessing is a temporary distraction that would test our commitment to democratic principles and the rule of law. We will not fail the test. “We implore all members of the party in the state to remain calm and law abiding. Every legal means would be employed to return the party to the overwhelming majority of members who have expressed their preferred leadership through the democratic process enshrined in the Constitution of the party,” the resolution read.

Other signatories to the resolution are members of the House of Representatives, Akeem Adeyemi, Tolulope Akande-Sadipe, Olumide Ojerinde, George Akintola and Jide Olatunbosun.

Share
Facebook
Twitter
Pinterest
WhatsApp
Previous articleSome Pills Are Hard To Swallow, Makinde Say’s As He Condoles with Families Of Victims of Idi-Ape Robbery
Next article3 Dead, One Injured As 4 Trucks Collide On Lagos/Ibadan Expressway

You Couldn’t Win Any Election Until Makinde Came — Oloko Tells...