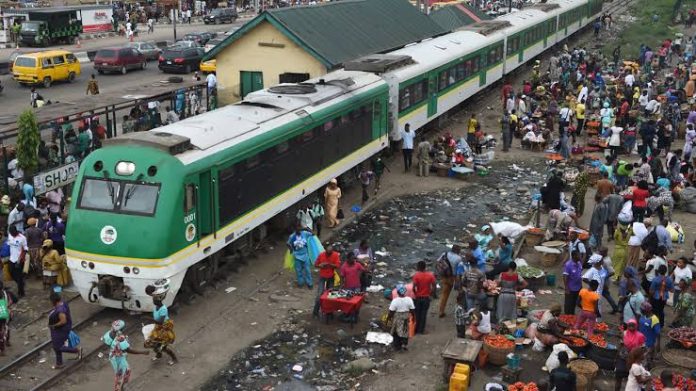 The activities of some hoodlums on the Lagos-Ibadan railway track forced train movement to temporarily stop on Saturday.

Passengers aboard the train which departed the Obafemi Awolowo Train Station in Ibadan at 8:30am on Saturday, were said to have been forced to stop somewhere before Funmilayo Ransome-Kuti train station at Papalanto area of Ogun State, due to the alleged removal of some components on the railway track by some vandals.

A passenger, who is a lecturer at the University of Ibadan, Dr. Feyi Leo, told The PUNCH that fear gripped her and other passengers, when the train was forced to stop.

Leo said the train coming from Lagos to Ibadan was also forced to stop in the opposite direction, adding that the two trains continued their journey after the damaged section had been fixed.

She said: “The trip was smooth and we had gone past the station at Abeokuta — moving towards Papalanto, when the train stopped and reversed some few meters.

“We were agitated and started asking questions. An announcement was made by the NRC official on board that, their technicians were fixing a fault on the track, and that it would not take long.

“True to their word, we left after 20 minutes of stoppage. But I was afraid while the whole thing lasted because of the materials on my laptop. There is no backup, and it would have been a huge loss if anything had happened to my laptop.”

Another passenger, who identified himself as Promise, said, the temporary stoppage caused panic on board the train. He, however, added that there were armed security agents on board,and technicians, who fixed the damaged track.