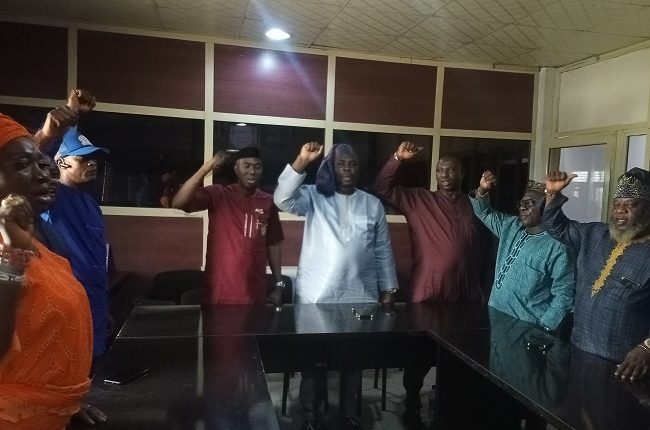 The Agbekoya Farmers’ Association of Nigeria has called on the government of Benin Republic to urgently release the detained Sunday Adeyemo, popularly called Sunday Igboho, else traditional powers will be used to release Igboho from detention.

In what it called a final ultimatum, President General of the association, Kamorudeen Okiki said the Agbekoya is being forced to activate traditional means to release Igboho because the legal way being adopted was getting more frustrating by the day.

Addressing journalists in Ibadan, on Friday, Kamorudeen warned against anyone daring or belittling the potency of traditional powers in effecting Adeyemo’s release from detention.

The Aare Agbekoya expressed displeasure at the continued detention of Igboho in Benin Republic, saying no criminal charge has been established against Igboho.

He noted that the Agbekoya association is not unaware of plans to frustrate Igboho including his being moved from one detention facility to another in Benin Republic, coupled with his recent six-month detention extension.
Kamorudeen added that the frustration is telling on Igboho’s mum, who he said, is sick presently.

Kamorudeen said: “Last time that I told them in Osogbo that Agbekoya will release Sunday Igboho the traditional way, people think it is a threat.

“Who says there are no traditional means? Agbekoya has powers today as of old. We will do what we say we will do. The advice Yoruba leaders have given is that the legal process should be allowed first but if that does not provide the needed solution, Agbekoya should use its traditional powers.

“We are observing all that is happening in Benin Republic. They are taking him from one prison to another.

“Security with Igboho was changed. But, all that means nothing to us because we mean business regarding releasing Sunday Igboho using traditional means.

“Honestly, we don’t need to enter Benin Republic before we bring Sunday Igboho to Nigeria.

“We are unmoved about the number of security personnel around Sunday Igboho, we will do what we want to do.

“The first time we said we will adopt traditional means to release Igboho, he was taken to court to secure the six months detention order.

“We are giving them the second chance. The third time, we will not call journalists before we do what we want to do.
“We are facing the government of Benin Republic and saying, Release Sunday Igboho now before Agbekoya will release him using our traditional means.

“As we are talking, mother of Sunday Igboho is sick. Do you want her son to die? Moreover, there is no criminal charge in Igboho’s file.”

Speaking further, the Agbekoya President called on President Muhammadu Buhari to yield to calls for restructuring of the country.