HomeNEWSHow One of Igboho’s Boys, Kokoro Was Allegedly Killed In Soka Area...
NEWS

How One of Igboho’s Boys, Kokoro Was Allegedly Killed In Soka Area By Hoodlums (PHOTO, VIDEO) 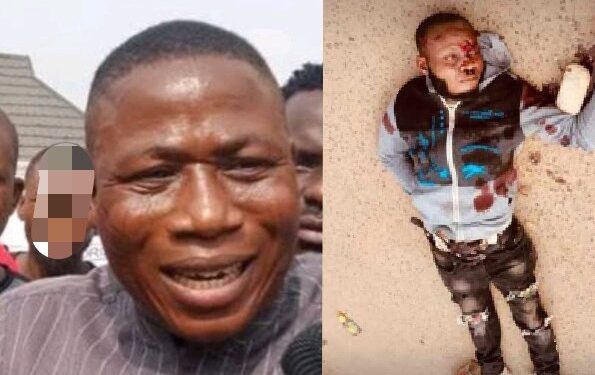 Some armed thugs alleged to be PMS boys have attacked the Soka residence of the Yoruba Nation agitator, Chief Sunday Adeyemo, aka Sunday Igboho in Ibadan.

An aide of the embattled Yoruba nation agitator Chief Sunday Adeyemo (aka Sunday Igboho) simply identified as Kokoro killed by hoodlums during a violent attack on his supporters.

The deceased was said to have been killed at Soka area of Ibadan at about 3 pm on Saturday as a confrontation between Igboho’s supporters and the motor park touts escalated.

The fracas was said to have been triggered by some touts who accosted an Igboho supporter who wore a shirt on which Igboho’s picture was printed. The hoodlums were said to have confronted the man, querying him for wearing the customized Igboho shirt. It was learnt that the incident occurred in the morning.

Igboho is currently being detained in a prison facility in the Republic of Benin, after he was arrested at Cardinal Bernardin International Airport, Cotonou, while on his way to Germany in July.

The development was also confirmed by one of Igboho’s aides, Onaolapo Ademola Omiyale, who ran a live Facebook broadcast.

He claimed that Igboho’s supporters were the focus of the target.

Sources in the area said there was pandemonium in the Soka community in the afternoon following sporadic gunshots.

Also, in the videos circulating, some of Igboho’s supporters who reportedly confronted the armed thugs, sustained injuries.

People in South-West Would Have Been Trekking, if I Hadn’t Intervened...