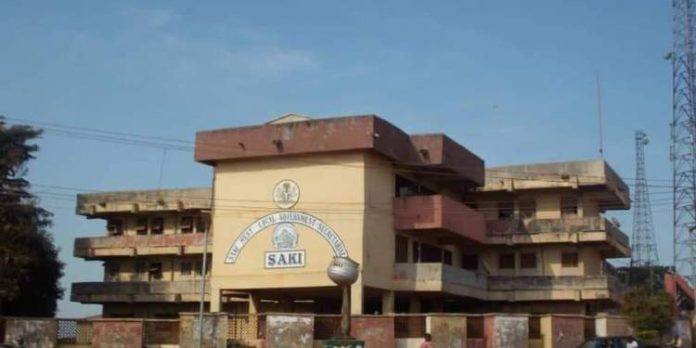 A development which has led to the arrest of 9 motorcycle riders last week by men of the Nigerian Police Force.

However, the whereabouts of Mr Babatunde has not been known as of the time of filing this report. Sources said he has went hidden.

Insideoyo.com gathered that a consultant with the name M M Global has been in charge of collecting revenue for the state government via the motorcycle riders in the local government area.

Meanwhile, there have been allegations from different quarters that the issuance of forged receipt was not unknown to the council chairman.

A source who confided in insideoyo.com said the action of Mr Babatunde was an indirect action of council chairman.

He said since the nomination of the Mr Babatunde was by the chairman hence, his moves and actions cannot be far fetched from the chairman.

He concluded by calling for proper investigations into the matter.

But the chairman, Engineer Sarafadeen Omirinde, said he was not aware of the issue until the arrests were made last week adding that the consultant didn’t inform him about the development.

Omirinde in a telephone conversation with insideoyo.com on Tuesday said there was no how he will engage in such act sabotaging the effort of Engineer Seyi Makinde who is moving the state from poverty to prosperity.

He said he recommended Mr Babatunde because of his pedigree when it comes to revenue generation in the local government and not because of any ulterior motive.

He said to show his commitment and readiness to finding the truth, he has taken numerous steps.

He added that he has told the Police and the Department of State Security Service in the local government area to do everything humanly possible to arrest Mr Rasheed Babatunde to enable him face the wrath of the law.

Also, he inaugurated a committee with the mandate to look into the allegations of issuing of fake receipts.

Omirinde stated that the committee should do a thorough work with sincerity and fear of God.

The council chairman said that since last year the LG official and the consultant have been discharging their responsibilities as expected without any interference from any quarter.

“Also upon hearing that they were looking for Rasheed Babatunde, I immediately instructed the DPO to look for him”

He charged the committee to look indepth of the matter, especially to ascertain if the allegation is genuine or not, the printer or printers of the alleged receipts, those involved in the matter and what drafted them into such unholy act.

Omirinde said that the committee should submit its report as soon as possible.

While responding on behalf of the committee, Hon Abdul-Hakeem Shuarau appreciated the Chairman for given them the opportunity to serve.

He assured the Chairman that the confidence repose in the committee would not be misplaced.

Hon Shuarau promised that the committee would do a thorough job and would submit the reports of our findings within a shortest time.